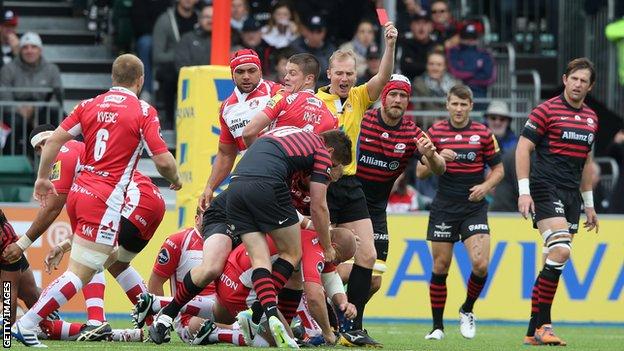 With just 73 seconds on the clock, Wood received a red card for a stamp on the face of Sarries flanker Jacques Burger.

Joel Tomkins crossed for the hosts but Gloucester led 12-10 at half-time thanks to Freddie Burns's boot.

But after the break, David Strettle's brace and tries from Schalk Brits and Billy Vunipola secured the bonus point.

Gloucester's situation in the second half was not made any easier by the sin-binning of number eight Sione Kalamafoni for dragging down the maul after 55 minutes, leaving them with just 13 men on the pitch.

But it will be the swift dismissal of Wood which lives longest in the memory for the fans in attendance at Allianz Park.

The game had barely got going when Wood stamped down on the face of Burger, straight in front of referee Wayne Barnes, who had no hesitation in brandishing his red card.

The fastest sending off in Premiership history remains Mick Watson's dismissal after 42 seconds when playing for London Scottish against Bath in May 1999.

Despite their numerical disadvantage, Gloucester took the lead through Burns's penalty before Tomkins scythed through under the posts after good work from Matt Stevens in the build up.

Burns kept the scoreboard ticking over for Gloucester against the run of play with some superb goal-kicking but the brutal reality of the visitors' situation was exposed soon after the break when Strettle stormed over.

Saracens' dominance was becoming increasingly apparent, and when a driving maul which travelled some 30m was hauled down by Kalamafoni the referee brought out his yellow card.

Brits drove over in the corner shortly after on 57 minutes to reinforce his side's lead but the anticipated opening of the floodgates did not follow with Gloucester defending stoutly against all the odds.

Vuipola's bonus-point score did not arrive until four minutes from the end when he powered over from the back of the scrum with the unfortunate James Simpson-Daniel drafted in as flanker to try to stop him, while Strettle's chip ahead and gather at the death added further gloss to the scoreline.

"In a bizarre way I'm a lot happier about the way we went about our business with 14 players this weekend than we did with 15 last weekend.

"It was always going to be a tough ask to come here and we were in the right frame of mind and the boys showed that to carry on the way they did.

"We're not where we want to be after two games, but I'm confident this team will start winning sooner rather than later.

"Right now we're in a tough place, but the boys won't let their heads drop."

"It was a professional job done by us. Defensively we were brilliant. It was a pleasing result and a good performance too. We were good value for our five points.

"Jacques Burger has had a difficult couple of years so to come back and put in the performances he has against London Irish and now Gloucester is brilliant for him and the club. He's an elder statesman."