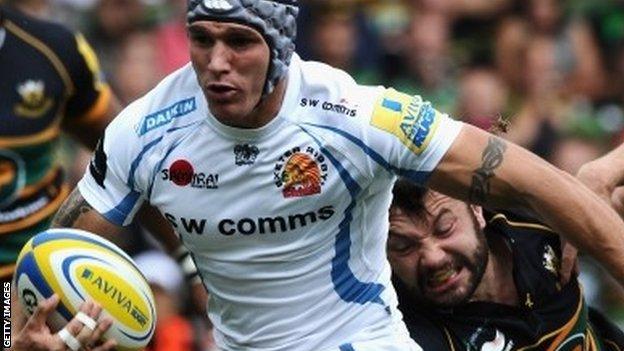 Exeter held on for their first win of the season as Tom James's brace gave his side a nervy victory over Wasps.

James's first try and Gareth Steenson's kicking helped the Chiefs to a 10-6 lead after a slow start to the game.

James Scaysbrook and winger James, with a 50m sprint, crossed to put Exeter 28-12 up but Christian Wade and Johnson tries gave Wasps a losing bonus point.

After a poor showing in their opening game of the season against Northampton, Exeter were keen to make amends but made an inauspicious start with Phil Dollman giving away a penalty for holding on to the ball almost straight from the kick-off.

Andy Goode slotted the kick and doubled the lead soon after as Exeter gave away a succession of penalties before Steenson's penalty finally got the Chiefs on the scoreboard.

James took advantage of a stretched Wasps defence to cut inside and cross, and Goode and Steenson exchanged penalties, before Johnson was sent to the sin bin for a dangerous high tackle on Haydn Thomas.

Despite their numerical disadvantage and a game plan lacking in ambition, Wasps narrowed the gap by half-time with the dogged Goode keeping his side in the contest.

But a mistake by Wade, who failed to gather a grubber from Dollman, opened the door for Scaysbrook to cross and put daylight between the sides.

When James sprinted in from 50m after beating his man soon after, Exeter looked set for a comfortable win.

But the home side lost their way as first Wade, with a clinical piece of finishing, and then Johnson, from a driving maul, got Wasps to within touching distance and gave them the consolation prize of a losing bonus point.

"We have done the important thing of banging in a win in our first home game and now we can sit back and look at the bigger picture.

"We have had Northampton away followed by Wasps at home and collected four points; it's not a bad start.

"The important thing for us now is to push through and make sure we keep improving and collecting points.

"A challenge for us has been that when we are ahead to turn the screw and close out the game.

"It has been a bit of an Achilles heel for us. I wouldn't say that we stop working but we maybe lose a bit of focus and I think that is what happened today.

"We will obviously talk about it but the reality is that Wasps are a good side."

"We are still a young pack and I thought we had the edge in the scrum as well as challenging them in the line-out.

"We were very wary of their contact area but we controlled that as well so I was quite pleased with that.

"In fairness to Exeter I thought they had real bite in their defence, we struggled to get any real penetration, we tended to be quite lateral in our attack, we struggled to break them down and when they had opportunities they took them.