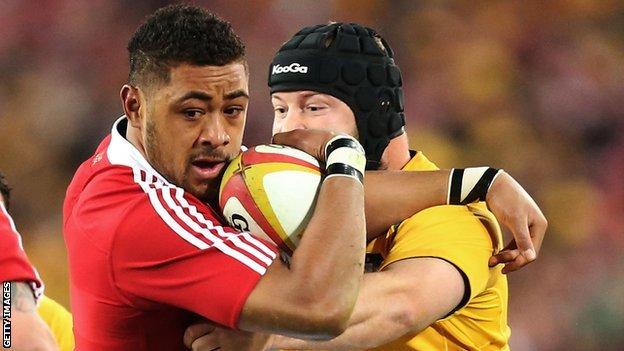 British and Irish Lions number eight Toby Faletau has been told to "pull his socks up" by Newport Gwent Dragons' coach Lyn Jones.

Faletau is set for a season's bow off the bench for the Dragons at Edinburgh on Friday having not played since the Lions' series-winner against Australia in Sydney on 6 July.

Jones says as "can be expected" the 22-year-old has fitness work to do.

"He's just not in the condition we were hoping he'd be in," said Jones.

"So he's got a bit of work to do on his conditioning as well as his game. But that can be expected.

"When you've achieved and reached the height you've got to celebrate it.

"But he needs to pull his socks up now and he knows he's got a bit of work ahead of him."

Faletau has made 26 Wales appearances, making his debut against the Barbarians in June, 2011.

A few months later he made his mark as Wales reached the 2011 World Cup semi-finals before starring in Wales' 2012 and 2013 Six Nations title-wins.

And Faletau was called into the deciding third-Test starting line-up that ended with a 41-16 win for the tourists.

In August the Tongan-born player signed a contract extension with the Dragons,

Jones hopes the player can soon return to full match fitness and from, but believes the player's post-Lions tour break was one week too long.

"I think four weeks' rest post third test will have been sufficient for Toby," said Jones.

"For whatever reason he had five weeks' rest and it's knocked him a little bit."

The Dragons kicked off their season with a and travel to Murrayfield to face Edinburgh on Friday, 13 September (19:45 BST).