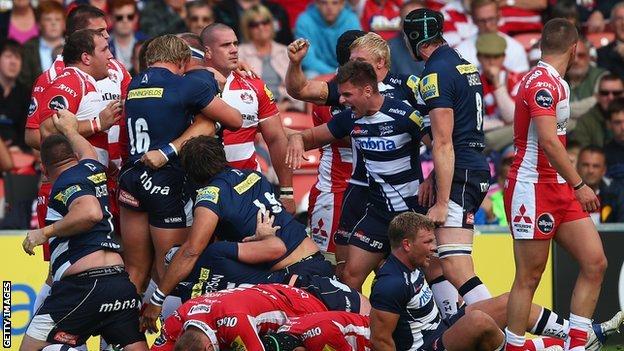 Winger James Simpson-Daniel says he was "embarrassed" by Gloucester's defeat at home to Sale on the opening weekend of the Premiership campaign.

Sale finished 25 points behind the Cherry and Whites last season, but put in an impressive display to win 22-16.

"We've shown very, very short glimpses about what we are about, but it's embarrassing," Simpson-Daniel, 31, told BBC Gloucestershire.

"We've got to face up to the fact that it wasn't good enough.

He continued: "It was horrible for everyone involved. It leaves a bad taste in the mouth until the next week when you can try to put it right."

The England international said: "I feel absolutely fine. On a personal note, if there's any positives to take from it, it's that I feel good and there's no issues there."

Gloucester must now prepare for Sunday's game with Saracens, who finished last season top of the table before losing to Leicester in the play-offs.

And Simpson-Daniel says they must show a positive reaction after their below-par performance at Kingsholm.

"We're going to have to get our heads down and do our analysis," he added.

"There's no point in feeling sorry for ourselves, although I don't think anyone is as we're too angry.

"We're all frustrated and we need to show that next week."