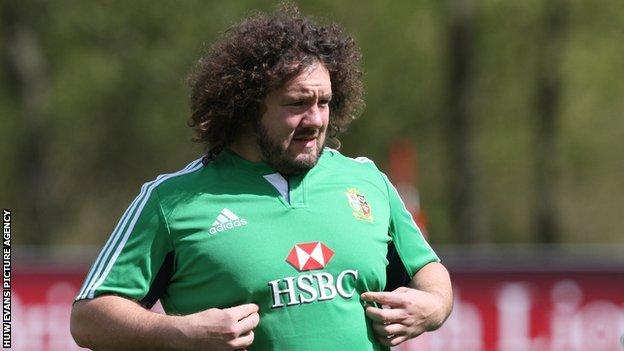 The Scarlets, Dragons and Cardiff Blues chose to overlook their Lions in the opening round of the Pro12 after a gruelling tour of Australia.

Adam Jones, Richard Hibbard and Ian Evans came off the bench for Ospreys' win at Treviso, but Alun Wyn Jones and Justin Tipuric were rested.

"It's a difficult balancing act for everyone," ex-Lions star Williams said.

"If your region loses one or two then you're thrown in there.

The bread and butter stuff for the French and English is their league, and they play a lot in the league

The Welsh Lions who have joined clubs in England and France have mostly gone back into club action earlier than their counterparts still with the four Welsh regions.

George North made his competitive debut for Northampton against Exeter in the Aviva Premiership at the weekend, while Dan Lydiate and Jamie Roberts - at French side racing Metro - are already several weeks into the new season.

"At the moment the Wales team has been very successful and we're all absolutely delighted, but the bread and butter stuff for the French and English is their league, and they play a lot in the league," added Davies.

Dragons coach Lyn Jones said he had no hesitation in leaving Toby Faletau out of the win over Ulster on Friday.

"For Toby I'm sure he'll have some involvement, if not next week, then certainly against the Scarlets," Jones said.

"It's going to be difficult for Wales in the Six Nations and Dan [Lydiate].

"I think Mike Phillips proved in 2009 when he played the first game for the Ospreys away to Connacht and Mike's game fell off December time.

"We need to look after our players and the Irish Union are very good at looking after their players.

"There's a balance to do well at the Rabo [Pro12] and for Wales to do well.

"That was the whole idea of starting regional rugby, to get the balance, to improve our European performances and to make Wales a successful nation.

"That's why regional rugby is a massive success."