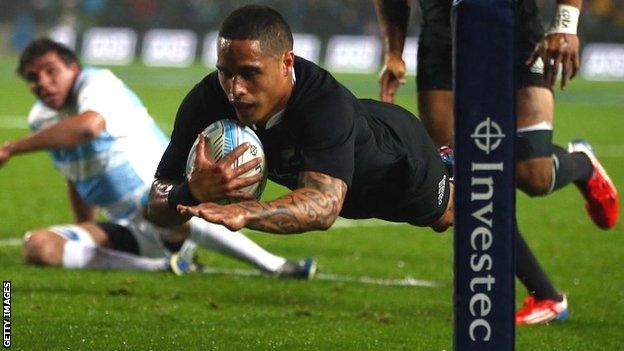 New Zealand extended their 100% start to the Rugby Championship with a 28-13 victory over Argentina in Hamilton.

Two tries from scrum-half Aaron Smith and a third from Julian Savea saw the All Blacks equal their own tournament record of nine straight wins.

But they lost skipper Richie McCaw to a knee injury that is likely to rule him out of the rest of the Championship.

We will get the mirrors out and have a really good look. We know we have to do a lot better

They next host South Africa, who top the table courtesy of a bonus point from a record 38-12 win in Australia.

The Springboks led 16-6 at half-time after an early try from replacement prop Coenie Oosthuizen and three Morne Steyn penalties.

But they ran riot with three tries - from Jean de Villiers, Zane Kirchner and Willie le Roux - in nine second-half minutes to record their first win at Suncorp Stadium and their first in Brisbane for 42 years, notching both their biggest points tally and winning margin in a Test in Australia in the process.

It was a worryingly inept performance by the Wallabies, who were overpowered at the scrum and breakdown by an enormous South African pack, and rarely looked like scoring a try.

Four Christian Leali'ifano penalties were all the hosts could muster. They have now conceded 16 tries and 153 points in their last four Tests, starting with their final-Test drubbing by the British and Irish Lions.

After home and away defeats by the All Blacks, a third straight defeat leaves them desperate for a win over an improving Argentina in Perth next Saturday.

The Pumas took an early 7-0 lead at a rain-lashed Waikato Stadium with a converted Juan Manuel Leguizamon try.

But a Dan Carter penalty - taking Test rugby's record points-scorer past the 1,400 mark - and two quick-fire tries from scrum-half Smith while Pumas hooker Eusebio Guinazu was in the sin-bin, saw the All Blacks take a 15-10 half-time lead.

But the All Blacks, who equalled their own Tri-Nations/Rugby Championship record of consecutive wins from 2009 to 2011, lost skipper McCaw to a knee injury on the hour.

The iconic flanker, who has recently returned from a six-month sabbatical, limped off with a suspected torn medial ligament.

Coach Steve Hansen later said the injury, sustained after prop Charlie Faumuina fell on McCaw's leg in a tackle, could keep him out for up to five weeks.

That would rule him out of the rest of the Championship, including home and away clashes with South Africa, starting next Saturday in Auckland.

Argentina also suffered an injury blow which may have repercussions for Leicester when wing Gonzalo Camacho departed early in the second half with a dislocated shoulder.