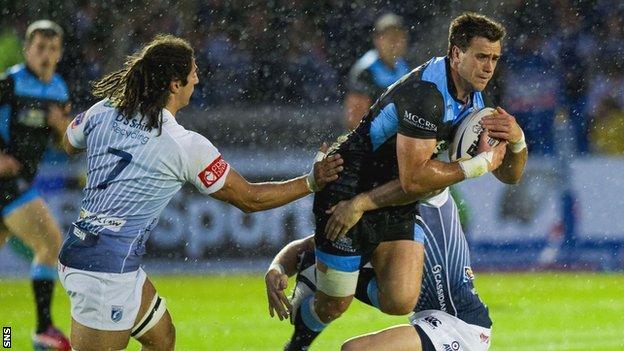 "There is room for improvement. It was a tough night," he said after , the game's sole try scored by Glasgow's Tommy Seymour.

"I'm just delighted that the players came back at the end. They showed great effort and skill to get that win.

"It was one of those games where a breakaway try was the difference."

Townsend, now in his second season at the helm of the ambitious club, wants to improve on last year's play-off semi-final defeat by Leinster.

To reach the last four may often mean grinding out victories like the one over Cardiff, which was played before more than 5,000 fans in wet and windy conditions.

"It was heavy rain right from the beginning of the game and both teams were a little bit rusty, [with it being their] first game of the season," the coach explained to BBC Scotland.

"I thought the effort in defence was very good.

A lot of teams have recruited very well in the summer. You'll see more defeats for the supposed top teams so it makes it an even more difficult campaign

"I am very pleased with the squad effort but there is lots to work on - how we get better playing in wet weather, how we improve our discipline.

"A lot of our errors were just over-enthusiasm, but the fundamentals were there; running hard on to the ball and tackling well.

"I thought we looked more dangerous on the ball. Cardiff played smarter rugby at times.

"They put the ball in behind us and kept the pressure on and in the second half they nearly got a try near the end. We had to hold them up near the line."

Glasgow's task was made more difficult by injuries to captain Al Kellock and winger Byron McGuigan after only 20 minutes of the match.

The lock left the pitch on a stretcher but was in good spirits after the match, despite his leg being encased in bandages.

"It's not as bad as I thought," said Kellock of his injury. "They made me go on the stretcher."

Outside centre Mark Bennett smashed home two long-range penalties while stand-off Scott Wight had a good night with his boot from closer range.

And for much of the match it was a case of the home duo trading penalties with Blues star Rhys Patchell.

The Warriors were the top try scorers in the Pro12 last season yet Seymour's exhilarating burst through to cross the line was the only one of its kind at Scotstoun, though Blues scrum-half Lloyd Williams just failed to register a try as the match reached its end.

Townsend said: "We know how long the season is going to be and how tough it is and how we have to front up every week and take opportunities when we get them.

"We've now got Ulster away and Leinster at home, the two best teams in the league last year.

"We'll have to improve to win those games."

Ulster are likely to be smarting after their 15-8 defeat by Newport Gwent Dragons on the season's opening night, but the score did not surprise Townsend.

"It suggests there will be more teams losing this year," he said.

"A lot of teams have recruited very well in the summer. You'll see more defeats for the supposed top teams so it makes it an even more difficult campaign."