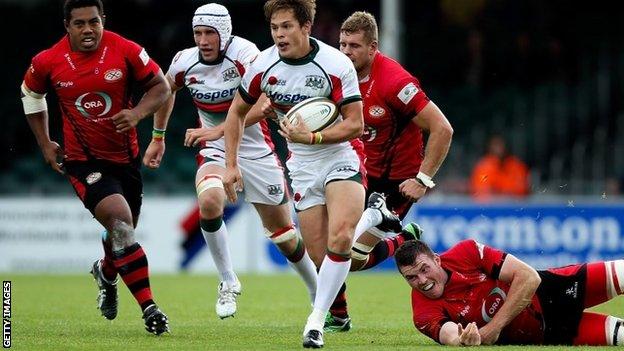 Plymouth Albion pulled clear in the closing minutes to open their Championship season with a lively victory over Jersey at Sandy Park.

The sides had been evenly matched but a late burst, and the goalkicking of Dan Mugford, clinched the win for Albion.

Jersey had opened up a 21-13 lead but were left chasing a draw as they trailed by just seven points late on.

A spilled ball though gave Albion full-back Chris Elder the chance to run in from distance and seal victory.

The afternoon had got off to a relatively bright start for the islanders when, after trading early penalties, back row Tom Brown crashed over the line following a line out and powerful maul to put his side ahead.

I think I could've waltzed through some of the tackles today

In a topsy-turvy and captivating first half, Albion hit back as Ien Ascroft-Leigh went over but Jersey were back in front when good work from Fred Silcock fed winger Ed Dawson to touch down.

The islanders were 15-13 up at the break and two Aaron Penberthy penalties extended that advantage before Plymouth found a new gear and stunned their opposition with two tries in the space of three minutes.

Winger Tom Bowen showed superb pace to grab the first and then was instrumental in setting up full-back Elder for the second. Both were converted and Jersey had gone from eight points ahead to six behind in the blink of an eye.

Penberthy, starting in place of the injured Niall O'Connor, hauled his side back level at 27-27 with two penalties but the Channel Island outfit seemingly started to tire and Rob Langley's touch down clinched the bonus point for the Devon side.

With a seven-point deficit it looked like Jersey would take at least a losing point from the encounter but Elder's second try at the death made it 41-27 and meant they departed Exeter with nothing to show for their efforts.

"I think I could've waltzed through some of the tackles today," said Jersey boss Ben Harvey.

"It just wasn't good enough defensively, we slipped off far too many and lost our concentration.

"We got in complete control of the game with ten minutes gone of that second half, but to go and gift them two stupid tries, you can't do that at this level."