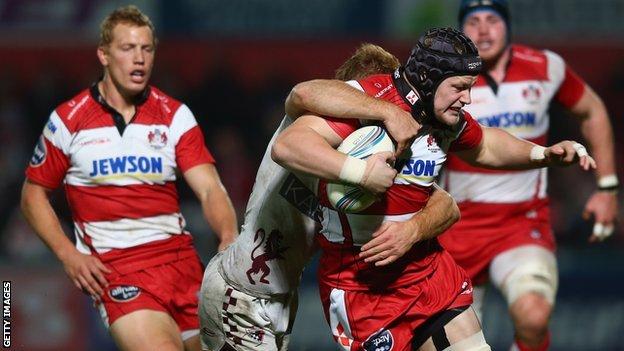 At 24, lock Savage is six years younger than the Cherry and Whites' previous skipper Jim Hamilton.

But Davies believes both he and England centre Twelvetrees are the right players to take on the roles.

"They've got different qualities that will work to lead this group," Davies told BBC Points West.

"The combination of the two is important. Tom's a natural leader and will lead by his example.

"He's still very young but so is a large part of this group. They are going to mature together over the next few years."

Savage signed for Gloucester from Hartpury in May 2011 and broke into the Cherry and Whites' first team the following campaign.

He has made 48 appearances to date and will now lead his side out in their Premiership opener against Sale on Saturday.

"He has everyone's respect," said Davies of Savage. "He's a real gentleman and is very focused and determined.

"The fact he's gone from not being on the radar to being captain within three years tells you everything about him."

This term, Davies has said consistency will key if they are to claim a top-four finish in April.

"We're wiser and more experienced than we were last season. It was all such a new experience for me last year that I didn't know what to expect," said the former Llanelli coach.

"We put in some huge performances and some average ones as well.

"We know what it's like to go away to all the venues and we've had a full season to review areas of our game. We want to get stronger in terms of game management and preparation.

"We're looking for improvement and if we do that, then who knows what will happen."