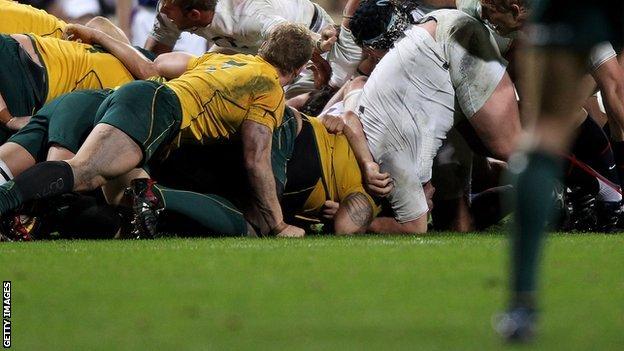 The new scrum directive coming into use this season should significantly reduce the number of scrums collapsing, says international referee Wayne Barnes.

Scrums will now have "crouch, bind, set" instructions - front rows will have to bind before engaging and packs cannot push until the referee is happy.

Barnes said there had been a "positive outcome" in pre-season trials.

He added: "We've seen more scrums off the floor, fewer resets, more ball in play and a better spectacle."

Barnes, speaking at a Rugby Football Union session to demonstrate the new directive, admitted "there will be teething problems".

But he is confident the change is good for the game and added: "This is a great opportunity for people to get behind what is a fantastic element of the game."

Shining a light on the "dark arts"

Ahead of the new Aviva Premiership season, which starts on Friday when newly promoted Newcastle host Bath, the RFU's top referees have spent the summer helping clubs adjust to the change in Law 20.

"We've been to a lot of the clubs," he said. "The Premiership referees have done about 40 odd visits this pre-season and what we've seen is a positive outcome and we're looking forward to the season ahead."

Problems with scrums have been well documented over recent seasons, with the 2013 Six Nations Championship a prime example of the issues.

Of the 100 scrums in the tournament there were 49 collapses, 33 resets and 39 penalties or free-kicks.

The new directives mean the power of the scrum on engagement will be reduced by about 25% and, in turn, this should reduce the number of collapses, making the scrum safer and more stable.

After the referee has called "crouch, bind, set" the official has to be happy the scrum is balanced before inviting the scrum-half to put the ball in - the call is likely to be "yes nine".

Neither pack will be able to push until the ball is in, while referees are now expected to insist the ball is put in straight.

With the ball going down the middle hookers will then hook the ball, an element of rugby union that has been significantly reduced over the past 10 years.

Barnes added: "We've been asked as a priority from the International Rugby Board to get the ball in straight. We know the media and the fans have been crying out for that.

"The ball won't be coming in until we say 'yes nine', which means the scrum is stable.

"That means we can take our eyes off the top of the scrum - the binding, the angles - and look for the ball.

"Before it was a very rushed and a quick engagement, but now our priority is the scrum feed, so that's one of the things we need to deliver as referees this year."

There has been criticism from many quarters of referees' knowledge about the "dark arts" of front-row play, and Barnes admitted all referees continue to learn about the subject.

"I've never played in the front row, but we've spoken to the experts, the former front-row players, the current coaches and you listen to that impartial view," he said.

"We have to make good accurate decisions - you can only do that from improving your game knowledge."

The new scrum laws have been in use in the current Rugby Championship and have been received fairly well.

However, some Aviva Premiership coaches have criticised the new ruling, with Leicester boss Richard Cockerill complaining that club bosses were not asked for their input.