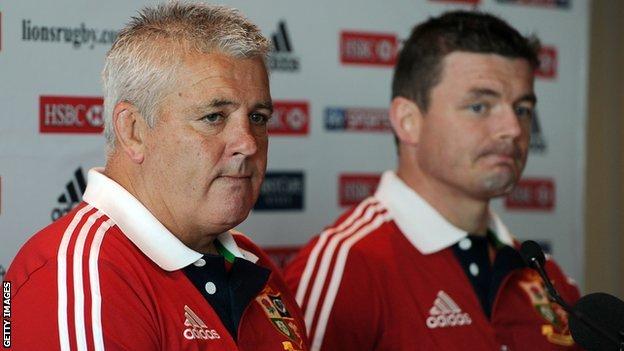 Brian O'Driscoll has acknowledged that he is still resentful towards Warren Gatland for dropping him for the decisive British and Irish Lions Test against Australia in July.

The veteran centre played in the first two Tests but was left out of the squad for the 41-16 victory in Sydney which clinched the series win.

"Is he (Gatland) on the Christmas card list? Unlikely."

O'Driscoll, 34, was widely expected to be named captain for the Brisbane game in the absence of skipper Sam Warburton, who was injured during the second Test on 29 June. Instead, Gatland omitted the Irishman from the squad entirely.

The Ireland star, who will retire at the end of the 2013/14 season, was taking part in his fourth Lions tour but was left out as Gatland instead plumped for the Welsh centre pair of Jonathan Davies and Jamie Roberts.

The decision caused uproar in Irish rugby circles although the Lions's thumping win in Sydney led many to conclude the Gatland's selection had been vindicated.

However, O'Driscoll has made clear his continuing unhappiness about his omission from the crunch game.

"When you're left with disappointment that way, you can't but feel a little bit of resentment," he added.

"People will say the decision was justified because of the results and the performance.

"The way the team played I felt within the 13 jersey that I might have been able to do a decent job within that part of the team the way they played in that game.

"That's absolutely not taking anything away from Jonathan's performance, I thought he was pretty good that day, made some big plays at important times.

"But I guess it comes back to you backing yourself, feeling you too could have done some things that maybe others didn't do on the day."