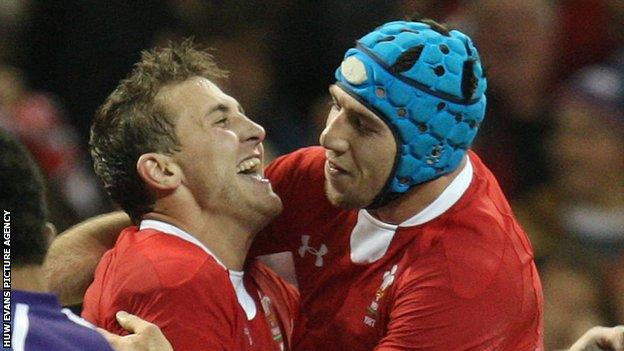 Ashley Beck believes the presence of five British & Irish Lions will make Ospreys a tough team to beat during the 2013-14 season.

Centre Beck says Ospreys will be better for that Lions success ahead of the Pro12 season.

"It's great for us to that we have so many Lions," said Beck.

"You go to places like Munster [and] Leinster. So hopefully they can bring something to the table and we can start winning in tough places like that.

"That's great for us to have the Lions' winning captain [Alun Wyn Jones] coming in and captaining us. That experience he would have gained from out there [in Australia] is brilliant.

"It will be exciting when they are all back and it will be good for the backs because we will be on the front foot a lot."

Four times capped Beck was forced to watch the Lions tour at home on TV after being ruled out of Wales' two-Test tour to Japan.

But he said the Lions gave him reason for celebration.

"I'm close to Justin [Tipuric] and for him to get on in that last Test and for Richard to start, I was over the moon for the boys.

"I'm glad to have them back. Then positive is that we have such strength in depth."

Alun Wyn Jones, Adam Jones and Tipuric are to be rested for the Ospreys' trip to Treviso, while Hibbard and Evans are expected to be named on the bench.

But Beck believes the influence of the Lions will help them in the Pro 12 and the Heineken Cup.

"We have always got to that last four [in the Pro12] but [last season] we left too much to do in the last three or four weeks," reflected Beck.

"Heineken Cup is always tough. It's always about winning your home games and we've always slipped against someone.

"So hopefully now this year, with the strength in depth we have got coming through, we can go and really push these teams at home."