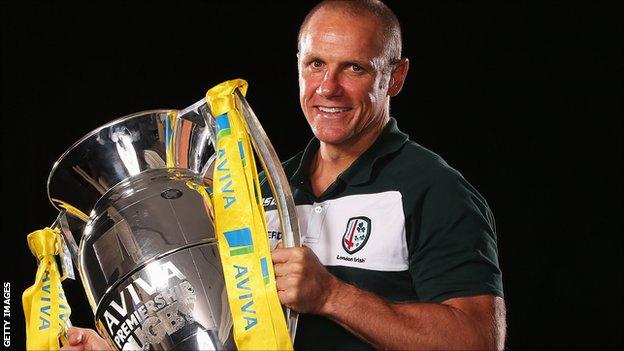 London Irish director of rugby Brian Smith believes the first five games of his side's 2013-14 Premiership campaign will set the tone for the new season.

The Exiles won only one of their opening five fixtures last term and Smith has warned his side not to repeat their sluggish start.

Smith's side open their season against Saracens at Twickenham on Saturday.

"The key thing for us is that we want to make a fast start," Smith told BBC Radio Berkshire.

After taking on Saracens, the Exiles face Worcester, Exeter, Bath and Harlequins in games that Smith believes will set the tone of their campaign.

"The first five matches are almost a quarter of the Premiership season and you can really set yourselves up," Smith added.

"Provided we're in touch at Christmas-time then anything is possible.

"Our supporters and players will not be happy with me saying I want to finish mid-table.

"Predicting where we are going to be at the end is very difficult. If we get a good start and are in the hunt at Christmas then I believe anything can happen.

"You have to have that mindset as a player or a coach that you can win the competition, otherwise you may as well stay in bed."

The Exiles finished ninth last season and take on a Saracens side who topped the Premiership table.

Smith's side have also seen key departures over the summer with Alex Corbisiero (Northampton) and Jonathan Joseph (Bath) among several players who have left.

But Smith is confident his side can compete with one of the favourites for this season's competition, having seen a number of new players arrive at the Berkshire side, including Leicester trio Jimmy Stevens, Jonny Harris and Alex Lewington, as well as prop John Yapp from Edinburgh.

"There is a big difference in resources between Saracens and ourselves, and they've got a very strong group of players," he said.

"I think the last time we played them at our place we won and won well, so we understand what we need to do to beat them.

"It's going to take a massive effort on our part. There will be no lack of enthusiasm and it'll be a great contest I'm sure."

The Exiles have beaten Nottingham in pre-season, while losing to Wasps and Munster, but Topsy Ojo - who has been playing at full-back - is confident the squad will be ready for the Twickenham double-header at the weekend.

"It's been a long time coming, we've done a lot of training in pre-season and cannot wait to get going.

"We've got a new squad, that represents an interesting challenge. The league is such a great competition and we are ready to test ourselves now against these teams.

"We've put last year to bed. It's about progress and learning from last year and making sure we are in a better place this season.

"We have done that so far during pre-season and need to translate that into the start of this season."