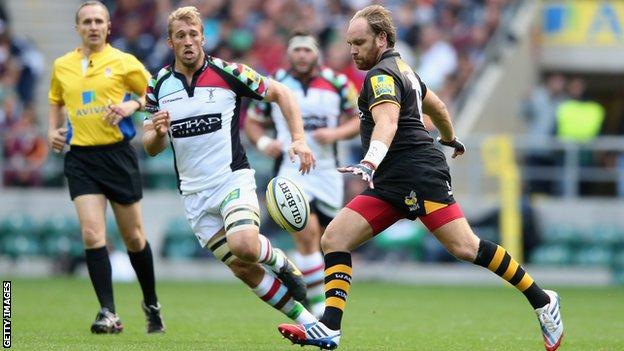 Andy Goode's last-minute conversion struck a post as Harlequins edged to victory over Wasps at Twickenham.

Joe Launchbury scored within seconds of the kick-off before Goode and Nick Evans traded penalties to leave Wasps 10-3 up at half-time.

Harlequins fought back after the break, Evans adding further penalties and Karl Dickson jinking over the line in style.

Tom Palmer then crossed with the 80 minutes up, but Goode's conversion dramatically came back off the upright.

It was another sickening blow for Wasps in this fixture, after Evans's last-gasp penalty secured a 42-40 win 12 months earlier - though the same player then missed a late kick at the Stoop in February to hand Wasps a 17-16 victory.

Each of the last three meetings between Harlequins and Wasps have been decided by a margin of two points or less, with Quins winning this fixture 42-40 last year before a 17-16 Wasps victory in February.

For the most part it was a game that lacked the spark of last season's thriller, when Quins recovered from a 27-point deficit to win, but the trend for enthralling encounters between these sides did continue.

The opening signs were promising when Wasps made a blistering start, Tom Varndell rising high to retain possession from Goode's kick-off and Sam Jones teeing up Launchbury for a simple finish.

The early thrill faded to a subdued tempo however, with Quins' Evans and his opposite number Goode, a summer arrival from Worcester, exchanging penalties for the half's only other points.

Wasps could have entered the break buoyant from a second try but Varndell, looking odds on to sprint clear, was cut down by a superb George Lowe tackle.

It would have been a welcome half-time fillip for Wasps, who would have been conscious of the 28-13 lead they took into the halfway stage in this fixture last season before going down at the death.

But Dai Young's side are a different proposition this term, fielding six new signings from a busy summer of recruitment, and looked capable of holding Quins at bay, despite giving away a series of sloppy penalties.

Their resilience was in vain though, with Evans kicking Harlequins to within a point by landing two of those penalties.

Dickson, on for the impressive Danny Care at scrum-half, looked to have secured a comfortable finish for Conor O'Shea's side by selling a superb dummy and touching down, with Evans' conversion giving Quins a six-point lead.

But Wasps responded ferociously, pinning Quins back and finally breaking through as Palmer crossed in the corner after Wasps had battered away through the phases.

Goode's kick from the touchline would have secured a one-point victory, but his effort hit the inside of the post to let Harlequins off the hook - and leave the fly-half with his head in his hands.

"Obviously Andy is disappointed. He'll win us more games - I thought he had a great game. Unfortunately it's the curse of the kickers, you're either a hero or a zero. But you win together and you lose together.

"I was really pleased with our attitude to defend for long periods against a quality team - at some stage the dam was going to bust.

"With six or seven minutes to go I still fancied us to get a try - which we did."

"I'm delighted with the result - it's an away win.

"We played two games against them last season and they were both decided by a score - this was decided by a post.

"I had mentally prepared myself for it to go over. He hit it beautifully and it hit the post - it's hit the inside of the post, not even the fat side.

"I said to Dai after the game we just shouldn't play each other, it's horrible."