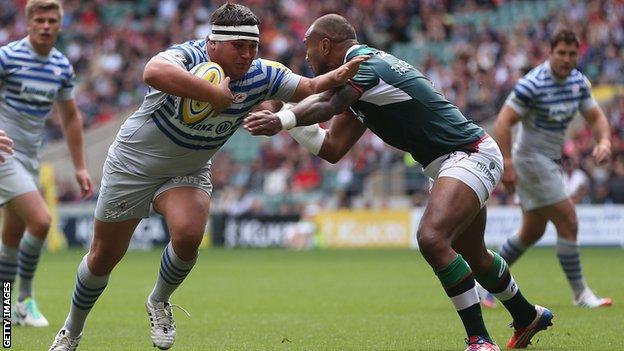 Saracens began the new season with a bonus-point win over London Irish.

Two tries from Jamie George, one for Mako Vunipola and 22 points from Owen Farrell sealed victory at Twickenham.

Sarries led 21-10 at the interval, with tries at the start and end of the half by George, while Irish's points came through a Kieran Low try and Ian Humphreys' boot.

Vunipola's touchdown and 11 further points from Farrell extended their lead after the break.

Saracens have started the new season looking like they mean business. Having finished top of the table last year - but then beaten in the play-offs - Sarries have a hunger for silverware.

Hooker Jamie George's two tries in the first half exemplified Saracens' superior power. Chris Ashton stretched his arm out like 'Inspector Gadget' at the very end to secure a bonus point.

Both teams struggled with the new scrum laws, resulting in numerous resets, but on this showing Saracens look very much the team to beat this season.

Director of rugby Brian Smith's side were defeated 40-3 by Sarries in last year's opener and having lost key players in the summer, such as Alex Corbisiero and Jonathan Joseph, their fans could have been forgiven for fearing the worst.

But this was an encouraging performance from Irish against a star-studded Saracens side who will be among the favourites for this season's Premiership crown.

Saracens opened the scoring at Twickenham through the boot of Farrell, with the Exiles' pack feeling the power of their opponents early on, and soon after last season's Premiership leaders were 10-0 ahead.

Debutant Billy Vunipola, who signed from Wasps in the summer, did the damage up front, creating space for England Under-20 hooker George to bundle over from close range, with Farrell adding the extras.

Irish responded well to the early setback as Humphreys sent over a penalty, but by and large they struggled to break the gain line and really threaten.

Sarries lost captain Steve Borthwick temporarily because of a blood injury and then survived Irish's first foray into their 22, with poor handling costing the Berkshire side.

Billy was great. He's worked hard, lost some weight and is in the best shape he has ever been in, and that's transferred onto the pitch and he has a work ethic that will hopefully continue

Farrell added another penalty with Irish's forward pack again creaking under pressure and on the half hour Ashton was only just held up after neat handling from the Saracens backs set him free on the right wing.

George got his second of the game, showing an extraordinary burst of pace to charge over from 15 yards following an intelligent inside pass from Richard Wigglesworth that exposed the Irish defence.

Low looked to have given the Exiles a lifeline with his touchdown straight from the restart and following Humphreys' conversion Irish had reduced the deficit to only eight points.

But Farrell ensured an 11-point lead going into the break with his third penalty, after Alistair Hargreaves' huge hit on Jon Fisher led to the Irish number eight not releasing in the resulting ruck.

Farrell began the second half as he ended the first with another penalty and soon extended their lead to 17 points and, most significantly, more than two scores.

Humphreys reduced that deficit with his second penalty but Vunipola scored a well-deserved try for Saracens, bundling over from close range, after their pack powered through the Irish defence.

Saracens prop Matt Stevens was sent to the bin for a shoulder charge and Irish took advantage, with winger Yarde finishing off a flowing three-quarter move which started in their own half.

But Farrell's penalty and Ashton's try in the corner at the death sealed Saracens' bonus point and ensured they ended the game in style.

"Our performance was a true reflection of where we are. Our scrum was very good, our line-out in the red zone needed to be clinical but the biggest difference was in the tackle area. They were good at being hard on the ball.

"They have a big squad, an embarrassment of riches, made four changes in the summer and their programme is three years ahead of ours.

"We are heading in the right direction, I am happy with where we are. 50-50 decisions didn't go our way.

"Three tries to two was a fair effort from our guys but the score at the end was touch and go and blew the scoreboard out."

"Billy [Vunipola] was great, part of a good back row today. We played him at six - he will play number eight regularly but thankfully he can play many positions. He's worked hard, lost some weight and is in the best shape he has ever been in and that's transferred onto the pitch and he has a work ethic that will hopefully continue.

"We [Saracens] haven't talked about last year a lot to be honest, it's time to move on and we did that over the summer. We are up and running, which is good.

"Jamie George has been unbelievably patient, he not only scored two tries but he was solid in the scrum and I have no doubt he will go to the top now."