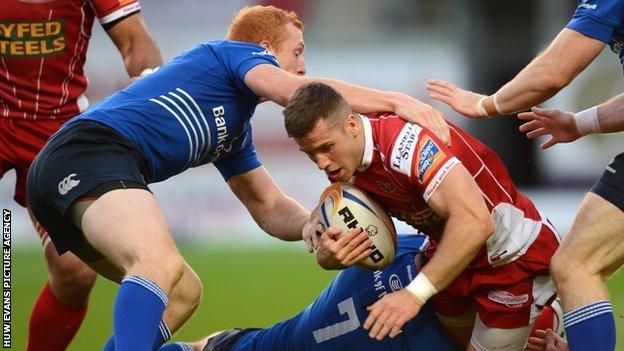 Debutant Leinster fly-half Jimmy Gopperth scored 22 points as the Irish province kicked off their Pro12 title defence with a bonus-point win over the Scarlets.

The hosts went 13-0 up as Steven Shingler kicked eight points and Rob McCusker went over.

Leinster hit back through Gopperth's boot and tries by Martin Moore and Jordi Murphy.

Darren Hudson, Gopperth and Dave Kearney also went over for the visitors

The Scarlets made a promising start with Wales back-rower Aaron Shingler's pace, footwork and eye for the gap evident.

In the tight the hosts also displayed an edge, profiting from the game's revamped scrum laws.

Irish referee John Lacey underlined the Scarlets' superiority in that phase as Leinster came under pressure.

And if the evidence of the opening quarter was to be believed, the Scarlets would have been comfortably clear at the break.

Steven Shingler's two penalties - the second after Kearney was sin-binned for a high tackle on Scott Williams - gave the Scarlets an early lead.

And a neat opening try in which Aaron Shingler led the way and centre brother Steven provided the scoring pass for McCusker's dubious grounding underlined the Scarlets' promise.

Steven Shingler added the conversion after video ref Derek Bevan ruled the try good to put the hosts 13-0 ahead.

Against the run of play, but true to their title-holding credentials, Leinster made the most of a rare close-range line-out for prop Moore to touch down after an impressive drive.

Gopperth added the conversion to the try scored by Moore, who was also making his full debut.

Former Newcastle fly-half Gopperth and Steven Shingler exchanged penalties to leave the hosts 13-10 ahead at the break.

But from the second-half kick-off, Leinster launched an audacious attack that ended with Brendan Macken powering through some indifferent tackling to send Murphy over.

Gopperth converted to give Leinster the lead for the first time.

Gopperth converted from wide out to create an 11-point lead, then sped clear for a memorable try.

Home full-back Gareth Owen and visiting prop McGrath ended the game in the sin-bin after a touchline scrap, denying Leinster the chance to replace their prop.

But it was business as usual where it mattered as Kearney rounded off a sweeping move before Gopperth completed his night's work with a seventh successful kick at goal.

Scarlets boss Simon Easterby told Scrum V: "[In the second half] We allowed too much turnover ball.

"We lost our composure and our discipline doubled in terms of penalties we gave away so it's hard to put into words when we felt like we were in pretty much full control first half and they'd spent 30-odd seconds in our 22.

"And you turn around then and just turned over so much ball. We just slipped off tackles and we didn't manage the game particularly well.

"We just forced a lot of stuff and against a good side like Leinster you're going to come unstuck."