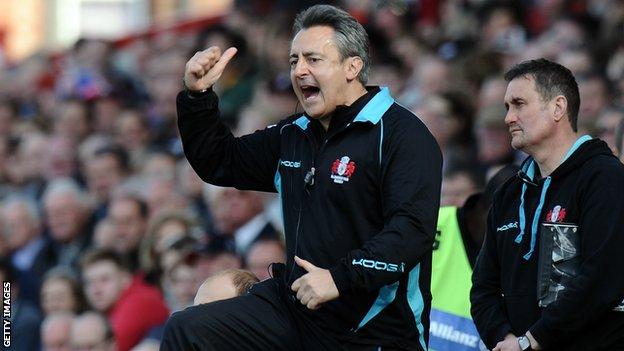 Gloucester director of rugby Nigel Davies says the success of the Wales national side is "papering over the cracks" in the game at domestic level.

"I do fear for it," he told BBC Radio 5 live. "The game works very well in terms of its development, and you've seen that with the national side.

"But it doesn't always work well for the regions, and the regions work hard developing those players."

One of the biggest issues currently facing Welsh rugby is the exodus of some of their best players to England and France, but Davies has a simple solution to keep them in Wales.

"One of the policies that England have, which works very, very well, is that you only play for England if you play within England, and Wales could quite simply adopt that policy," he said.

"I think it would make a huge difference."

Since his appointment in early 2012, England head coach Stuart Lancaster has only selected players from the Aviva Premiership, which has helped stop the flow of English players across the Channel to France.

Davies believes keeping high-profile players in Wales must be a priority, not least because the exodus has contributed to other problems in Welsh rugby, such as low crowds and the lack of identity many fans feel with the regions.

The Welsh national side won a third Six Nations title in six years in 2013 but Davies warned: "You have to look at the financial models of the regions as well - they are unsustainable, quite frankly.

"They are supposed to be working to a budget of £3.5m now. Well, you can't do that, particularly when you are trying to hold on to international rugby players, and hold a squad of about 50 rugby players. It's impossible."

The chief executive of the Welsh Rugby Union, Roger Lewis, says the policy of only selecting players based in Wales is one they support "in principle".

"Yes, the principle is right," he told Radio 5 live, "but we have to make sure we have created the right environment, both financially and in rugby terms, to retain those players in Wales in the first place.

"We are talking together, but it's not just talk. We met again a week last Saturday at the Millennium Stadium, with the chairmen of the four regions, and the key thing is how we can plan together sustainable futures for regional rugby in Wales."

The likes of Leigh Halfpenny, Jonathan Davies and Sam Warburton all impressed for the British and Irish Lions in the series victory over Australia in the summer, but are nearing the end of their contracts at their regions.

Lewis says the Professional Regional Game Board is aware of the importance of keeping these players in Wales.

"We have a clear sense of the talent in Wales," he insisted. "We are identifying the pool of players we need to secure for the long-term future.

"We have committed to putting £6.6m into the regions this year, and at the heart of that is to help them keep Welsh talent in Wales.

And Lewis says the relationship between the WRU and the regions is as strong as it has been for some time: "We enter the season in a far more unified way than we have for many, many years."