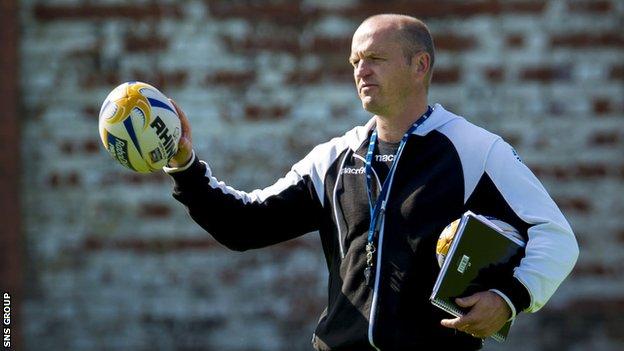 In his debut term Townsend took Glasgow to the Pro12 play-offs and for the third time in four years the club lost out in the semi-finals.

"Last year our goal was to win a title, either the Pro12 or the Heineken Cup and this season is no different," Townsend told BBC Scotland.

"We're all hungry to bring success to this club."

Last season Glasgow recovered from a slow start to finish third in the league table but once again failed to make any kind of impact in Europe.

The previous Pro12 campaign ended in a very tight 17-15 loss to Leinster in Dublin.

"So we need to improve in both competitions, starting on Friday night against Cardiff Blues.

"The work the players have put in pre-season has been excellent. We're in a great position physically and they have really developed their skills throughout last season and through pre-season.

"But it's a long season and it will be very tough.

"A lot of clubs have reinforced in terms of signings and we know we face a lot of challenges.

"I really believe in the strength of the squad and the depth of squad that we can compete from week to week from now until May."

Glasgow have retained all of their star men over the summer, including Lions pair Stuart Hogg and Ryan Grant, who are rested for the opening game, while influential scrum-half Niko Matawalu is also missing through injury, along with long-term absentees Ryan Wilson and Peter Horne.

The hugely popular Fijian has been joined by compatriots Leone Nakaraw and Jerry Yanuyanutawa this summer, while Richie Vernon is back for a second spell at the club.

"We have an excellent group that fight hard for each other," added Townsend.

"The majority of them are Scottish, 90%, and we have some really quality players from overseas."

In Hogg's absence, Peter Murchie starts against Cardiff at full-back and he echoed the head coach's aspirations.

"Certainly the expectation among the players is to challenge for the title," he said.

"We've made a couple of semi-finals now and it hurts. We need to use that to push us on to the next level."

Glasgow could hardly have been handed a tougher start in the Pro12, with Leinster and Ulster, last year's finalists, to follow the Cardiff game.

"It's important that we start quickly," stressed Murchie. "Last year we didn't have the best of starts then we managed to get on track."