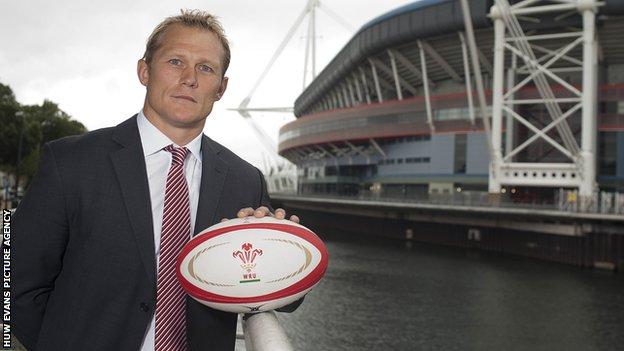 The 36-year-old ex-Wasps utility back will begin his new role at the end of September.

Lewsey succeeds Joe Lydon, who was appointed head of international player development for the Rugby Football Union in May.

"This is a challenge and an opportunity I'll approach with total commitment," Lewsey said.

"I'm delighted to have been offered this opportunity to play a pivotal role in ensuring the strength and well-being of the national sport of Wales."

A World Cup winner in 2003, Lewsey retired in 2009 after winning 55 England caps and making three Test appearances for the British and Irish Lions on the tour to New Zealand in 2005.

He recently stepped down from his role as acting chief executive with Cornish Pirates, a position he had held since March.

Joining the executive board of the WRU, Lewsey will take on operational and strategic management of the whole of the game in Wales from community to elite level outside the senior international squad.

"Everyone involved in rugby knows how passionate the whole of Wales is about the sport so I'm fully aware of the huge responsibility I'm accepting," Lewsey added.

"A key driver for me is to balance the focus between the elite and community games in a way that establishes a long-term sustainable platform for rugby in Wales."

Although an England international, Lewsey could have represented Wales through parentage as his mother is originally from Cwmllynfell in South Wales.

Wales head coach Warren Gatland said he was looking forward to working closely with Lewsey, whom he coached during a spell in charge at London Wasps.

"I know Josh well from his playing days at Wasps and he is a determined and focused individual who will bring immense passion, energy and rugby knowledge to the role," Gatland said.

"Josh will understand the strategies and procedures we have put in place at a senior national level and he will play a pivotal role in ensuring the whole of Welsh rugby operates in a joined up structure."