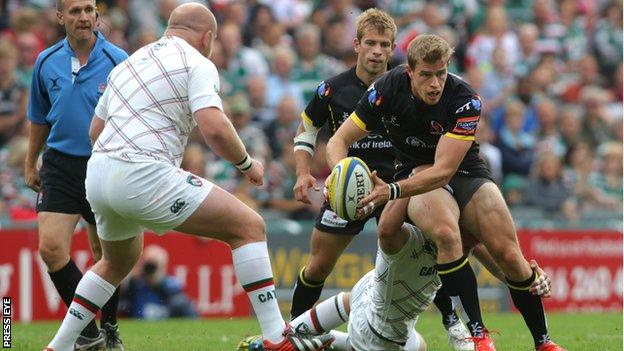 Ulster's last friendly before the start of the Pro12 campaign ended in defeat as Leicester proved too strong.

Leicester's Toby Flood had to be taken to hospital after a first-half collision with Dan Tuohy which led to the Ulster player being sin-binned.

Flood required oxygen on the Welford Road pitch before being taken to hospital after being caught by Tuohy's forearm in the 15th minute.

After a 15-minute delay, McKinney nudged Ulster ahead from a penalty before Flood's replacement Ryan Lamb levelled the contest.

However, a superb breakaway try from Morris was followed by Mele's touchdown and Lamb added a further penalty before half-time to put Leinster in control.

Allen added a further try after the break with Lamb adding his second conversion to extend Leicester's lead to 25-3.

After Leicester's Jerome Schuster had been yellow carded following Ulster pressure, Chris Henry did reply with a try for the visitors but de Chaves completed the scoring with a late touchdown for the home side.