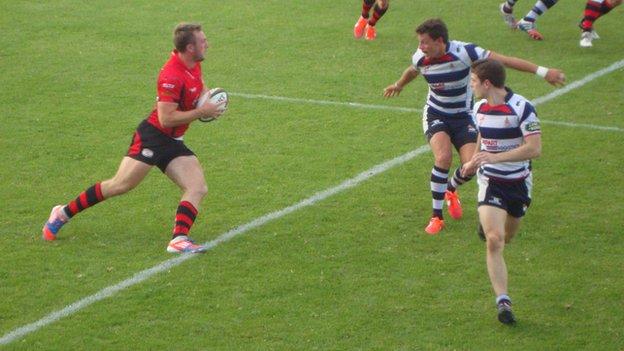 Jersey stuttered to a 31-21 win over National One side Coventry in a pre-season friendly at St Peter.

Grant Pointer touched down early on but Coventry hit back with tries from Jacques Le Roux and Mark Kohler.

Penalty-tries either side of half-time put the islanders back ahead but Greg Evans sprinted through to draw the visitors level.

Ben Maidment was sent off for foul play but 14-man Jersey clinched the win with two late Fred Silcock tries.

Jersey, who were fielding no island-born or developed players in their starting line-up for the first time in the modern era, started brightly and retained possession well in the opening stages.

Full-back Pointer found space out wide to go over in the corner on six minutes for his first points for the club but after their shaky start Coventry grew in confidence.

I'd have liked to have played perfect rugby but all credit to Coventry, they put us under lots of pressure

Le Roux touched down by the posts after a scrum and then Kohler capitalised on an awkward bounce which deceived Pointer to run through and put Cov 14-7 ahead.

Jersey, who were hoping to bounce back from the previous weekend, were level by the break thanks to a penalty-try.

Referee Matt Carley lost patience with the Coventry pack again after half-time and awarded a second penalty-try to the islanders but the visitors were not about to lie down.

Evans' burst of pace saw him fly through the Jersey defence to make it 21-21 and as the pressure mounted on the hosts Maidment was sent off for what Carley would only describe afterwards as "foul play".

Despite having to play most of the second-half with 14 men and numerous replacements which broke up the play, Jersey flanker Silcock made the difference late on with his two scores to ensure his side go into the new Championship campaign with a win under their belts.

"We turned down about 25 points at goal because we wanted to make sure that we were practicing our systems and our structure.

"I'd have liked to have played perfect rugby but all credit to Coventry, they put us under lots of pressure. It was a good exercise. "

For large parts of the match the Championship side would have feared an upset, particularly at 14-7 down and at 21-21 three-quarters of the way through the game.

"We're pretty disappointed to be honest with you, with two penalty-tries against," Coventry player-coach Scott Morgan told BBC Radio Jersey.

"We've recruited well and some of the new recruits were outstanding today.

"Come Christmas we'll assess where we're at, but we're quietly confident that we're going to do alright."