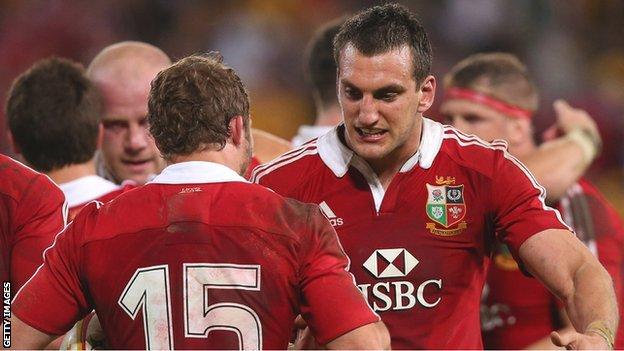 Both players shone on the triumphant British and Irish Lions tour in Australia, Warburton as captain and Halfpenny as man of the series.

But flanker Warburton and full-back Halfpenny will be out of contract at the end of the 2013/14 season.

"I've been having discussions with Leigh's agent for a while now," Blues chief executive Richard Holland said.

"And not just Leigh but other players who are out of contract at the end of next season.

The discussions we've had at the moment are quite high level, we haven't moved onto the financial numbers as of yet

"Sam is an important part of Cardiff Blues, and as a Lions captain and everything that comes with it we're going to be having discussions with his agent as well."

Warburton, Halfpenny, wing Alex Cuthbert, Gethin Jenkins - although an injury meant the prop, who has rejoined from Toulon, did not feature - and centre Jamie Roberts - who will play for Racing Metro next season - were Blues products picked for the Lions tour.

"Obviously off the back of the performances that the Blues boys put in over in Australia it's going to be even more important for us to keep them, and we're going to be working very hard to do just that," Holland added.

"All our international players we're keen to retain, we're keen to keep them at the Cardiff Blues to secure a bright future for us and complement the youngsters who have come through the system.

"It's exciting times but we're going to be fighting hard to keep them in Wales.

"The discussions we've had at the moment are quite high level, we haven't moved onto the financial numbers as of yet.

"I'm confident we've got the set-up in place and the ambition as a region - coupled with the desire from the Union to work with all four regions - to ensure we can retain these players."

The this year to help them hang onto their best players, rather then see Wales' top players leave for clubs in France and England.

"They are committing £1m this year to the regional game, so it remains to be seen how that gets invested and I'm looking forward to working with the other three chief executives and [WRU group chief executive] Roger Lewis and Stuart Gallagher at RRW [Regional Rugby Wales] to see how we can invest that.

"Those discussions will take place in the coming weeks and it's a positive step, a positive move."