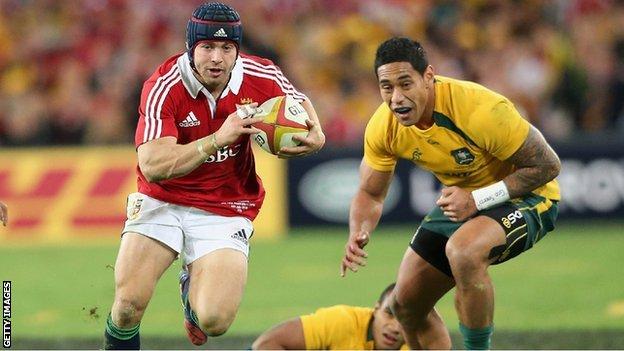 Leigh Halfpenny said being part of a winning British and Irish Lions tour has fulfilled a childhood dream.

The Wales full-back, 24, was voted man of the series and his contribution in the deciding over Australia in Sydney was decisive.

"I can't put it into words really how much it means. It's everything I've dreamed of as a kid growing up watching Lions tours," Halfpenny said.

"To be part of a winning Lions tour is one of the best things ever and up there with the best moments of my career."

As well as claiming the individual record for points scored by a Lions player in a single Test, Halfpenny's total of 49 points for the series is also a new record - passing his kicking coach Neil Jenkins's mark of 41 set in South Africa in 1997.

"I wasn't aware of that and obviously thrilled, but I wouldn't be able to kick the goals without the hard work of my team-mates," Halfpenny said.

"It was the same [in the third Test], they were outstanding. It wasn't just the starting 15, the match 23, it's the squad, the management and everything.

"It's a huge squad effort, there's a lot of hard work gone in since the start and the goal has always been to come away with a series win and that's what we've done."

Halfpenny had a hand in creating tries for Jonathan Sexton, flicking the ball back inside for the Ireland fly-half, and then shredding the Wallaby defence on the left to send Wales wing George North away.

"It was nice to be able to create some tries for the boys through a bit of counter-attack and great support from Jonny for his try and George," Halfpenny said.

"I can't put into words how amazing it feels... there's no better feeling than seeing the boys going over for all the tries."

In the second Test 16-15 loss in Melbourne, Halfpenny missed a last-gasp penalty from 50 metres - a kick on the very edge of his range - that would have given the Lions victory.

But the Cardiff Blues player said that had given him extra motivation going into the series decider.

"I had the chance to win it for the Lions and I didn't take it. That is what all the hard work is for, for moments like that. I was devastated at not being able to do it," Halfpenny added

"It was touch and go, that kick. I felt if I connected with it I would make it, but I didn't connect and it took me a few days to shake it off.

"It was hard after the game, I was pretty down. It was tough, really tough.

"I had to put it behind me but I also used the experience. I didn't want to feel like that again.

"I used it as a motivation because the disappointment can stay with you. I wanted to be a part of a Lions series win and it helped me.

"I've worked harder and harder in training and it all paid off."