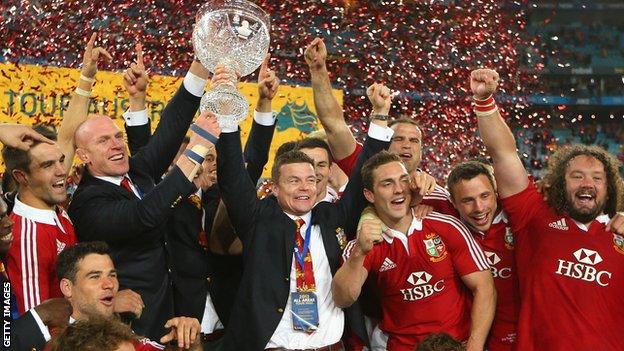 The British and Irish Lions ended a 16-year wait for a series win with a stunning second-half demolition of Australia in a pulsating decider in Sydney.

Leading 19-10 at half-time via an early Alex Corbisiero try and four Leigh Halfpenny penalties, the Lions roared to victory with three scores inside 12 minutes.

Jonny Sexton, George North and Jamie Roberts all crossed in a breathless spell to bring up the tourists' record points tally in any Test.

That was a new individual record for a Lion in a Test, overtaking the previous mark of 20 points shared by Jonny Wilkinson (in 2005 against Argentina) and Stephen Jones (in 2009 against South Africa).

It also took Halfpenny past Neil Jenkins's previous series record of 41 points for the Lions, the Welsh full-back finishing with 49.

A James O'Connor try from the last move of the first half had kept the hosts in touch after the Lions had gone 19-3 ahead, and two Christian Leali'ifano penalties cut the gap to three points early in the second half.

But Halfpenny's fifth penalty settled the nerves and the Lions then ran away with it, surpassing their previous highest tally of 31 - in 1966 - against Australia.

Lions coach Warren Gatland had summoned some heavy artillery in making six changes to the side that narrowly failed to clinch the three-Test series in Melbourne, when Australia edged a 16-15 win, and the changes yielded an immediate reward when one of them, Corbisiero, burrowed over with just one minute and 17 seconds on the clock.

Will Genia knocked on Sexton's kick-off to give the tourists a scrum platform that produced the first in a series of free-kicks and penalties.

Mike Phillips took a quick tap, Alun Wyn Jones was held up short, but the England prop - who missed the second Test through injury - forced his way over at the posts, Halfpenny adding the conversion.

The Lions promised an overtly physical approach, and hooker Richard Hibbard was at the heart of it.

Veteran Australia flanker George Smith, recalled for his first Test in four years, was led off gingerly after a sickening clash of heads with the Welshman in the fifth minute.

Remarkably Smith reappeared five minutes later, by which stage a thumping hit from Dan Lydiate on Joe Tomane, with help from Sean O'Brien, had produced a penalty from which Halfpenny made it 10-0.

Leali'ifano got the hosts on the board from the restart after some deliberate obstruction, but when they were penalised for deliberately wheeling the next scrum, Halfpenny restored the Lions' 10-point lead.

The Wallabies were then driven back on their own ball at the next engagement, with the same result: penalty to the Lions; Halfpenny through the sticks.

Ben Alexander was deemed the culprit, and when referee Romain Poite dispatched the Australia prop to the sin-bin for collapsing another scrum, Halfpenny's fourth successful penalty took him past Jenkins's record from 1997 - the last time the Lions won a series.

Australia belatedly built some momentum as half-time approached, Geoff Parling's superb ankle tap on Jesse Mogg, on as a replacement for the stricken Israel Folau, halting a dangerous attack.

Three times in quick succession Australia opted to kick penalties to touch rather than at goal, each time with no reward. But the third brought a scrum five metres out, and O'Connor stepped past Sexton and O'Brien to squeeze over, Leali'ifano's conversion cutting the deficit to nine points.

That was reduced to three within six minutes of the resumption as Leali'ifano landed two penalties.

But after Halfpenny made it 22-16 on 51 minutes, the Lions turned on the style to leave Australia in tatters.

Sexton and Tommy Bowe combined to send Jonathan Davies through a tackle and Halfpenny was on his shoulder, getting his pass away for Sexton to sprint over.

Halfpenny's conversion suddenly gave the scoreline a far more reassuring look from a Lions perspective at 29-16.

It got better and better.

Halfpenny, one of a record-equalling 10 Welshmen in the starting XV, stepped inside Genia and away from Tomane to send North surging to the left corner for a third try.

And the strains of "Bread of Heaven" were still ringing around the ANZ Stadium when Conor Murray's sweet pass put Roberts over for the fourth.

The Lions emptied their bench, including Richie Gray - the only Scot to feature in the series - as their army of travelling support were able to luxuriate in a thumping victory long before the end.