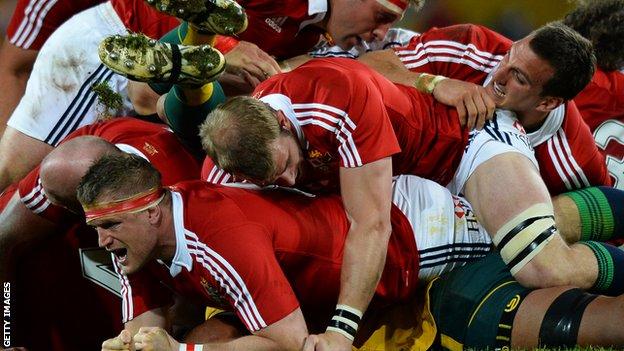 The British and Irish Lions must be ruthless in the second Test against Australia to secure a series victory, says assistant coach Rob Howley.

Victory in Melbourne would secure the Lions' first series success since the 1997 triumph in South Africa.

And Howley insists the players know what is required to beat the Wallabies.

"The side that has been selected has Test match animals that have made decisions in games - they understand what is required," he said.

"We know we can play a lot better than last week. Saying that, we know Australia are going to raise their game again. It is last-chance saloon for them, but we are confident we can go out and do it. It is a massive occasion and we are starting to realise how big this could be in relation to your rugby career and what a big deal these Lions tours are if you can get to that next level."

Australia are far from beaten and fought back from losing the first Test the last time the Lions toured Down Under in 2001 for their first-ever series victory.

But head coach Warren Gatland is not resting on his laurels and has made five changes from the 23-21 victory in Brisbane for Saturday's game, which kicks off at 11:05 BST.

Wing Tommy Bowe has made a remarkable recovery from breaking his hand at the start of the tour to take over from Alex Cuthbert.

Around 30,000 Lions fans are expected at the 54,000-capacity Etihad Stadium and captain Sam Warburton has said he cannot wait for the occasion.

"Normally, you are pretty nervous in the week going into a big game for your club or country, but the feeling ahead of this one is complete excitement, knowing what you could achieve," he said.

Captain James Horwill starts for Australia despite facing an International Rugby Board appeal against a decision which cleared him of stamping or trampling.

He was cleared at a disciplinary hearing after he was cited after his boot came into contact with the head of Lions lock Alun Wyn Jones.

Australia have kept James O'Connor at fly-half despite struggling in the first Test.

Kurtley Beale, who missed a last-minute penalty that would have given the Wallabies victory, starts at full-back in place of the injured Berrick Barnes.