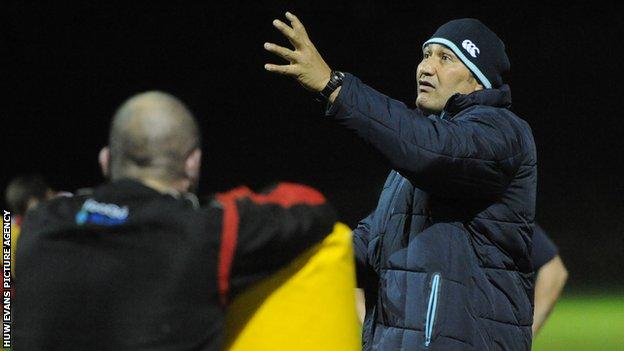 The 43-year-old, who was born in New Zealand but qualified for Wales on residency grounds, will combine the role with his position as head coach of Welsh Premiership side Pontypridd.

He will be involved "on specific times throughout the week with player skill development", according to the Blues.

Ring, 51, will continue to work as backs coach with Cardiff RFC in the Welsh Premiership. He made 32 Wales appearances during a career in which he starred for Cardiff and Pontypool rugby clubs.

The Blues had already announced that Andi Kyriacou would take up a coaching position. Kyriacou joined the Blues in 2012 from Ulster, but suffered a prolapsed disc early last season that has forced him to retire.

"Last season saw us blood a number of young players and twenty matches were won or lost by less than one score," said a Blues statement.

"With that in mind one of the main areas we wanted to develop was the technical skills in attack and defence as well as the set piece, especially the scrum.

"We aim to bolster the coaching team with the appointment of Dale McIntosh, Andi Kyriacou, Mark Ring who will be involved on specific times throughout the week with player skill development."