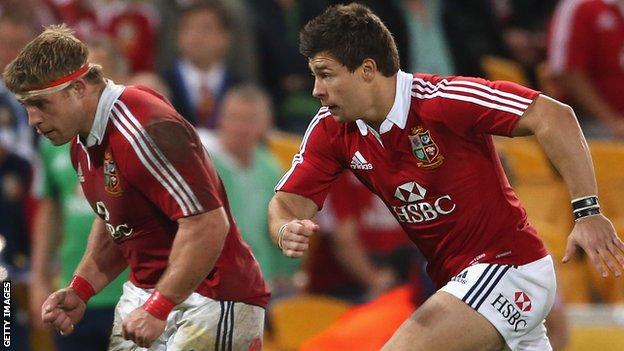 Ben Youngs says he is more concerned about helping the British and Irish Lions to a famous Test series win than playing alongside his brother.

The 23-year-old and his brother Tom, 26, will become the first siblings to start a Test together for the Lions since 1989 when they face Australia.

Victory in Melbourne on Saturday will clinch the series for the Lions.

"It's a bonus starting alongside your brother, but we've got an opportunity to a win Test series," said Ben.

Gavin and Scott Hastings were the last brothers to start for the Lions in the final Test of the 1989 series in Australia.

The Youngs, who both play for Leicester Tigers, both featured in the 23-21 win over Australia in the first of the three-Test series on 22 June.

But they were only on the field together for three minutes, with Ben coming on for the final 18 minutes and Tom being replaced with 15 left.

Ben replaces Mike Phillips at scrum-half for the second Test, and he has warned his team-mates that Australia will be hurting badly after last week's defeat.

Tom started the first Test on merit and was close to being one of the players of the game with his work-rate. It is up to him to continue that form now. If he does, it will go a long way to ensuring the Lions clinch the series

"Australia as a nation, you know when they've got their backs against the wall they come out fighting, they only know one thing," he added.

"They've got so much talent in their squad, even with a few injuries."

But Ben insists that the Lions are eager to make history and wrap up a Test series win against Australia.

"I think for everyone involved, the first goal we set out was to come here and be successful," he said.

"We've come here to win a Test series and for myself and everyone involved, it will be the biggest achievement that I have achieved on a rugby field yet."