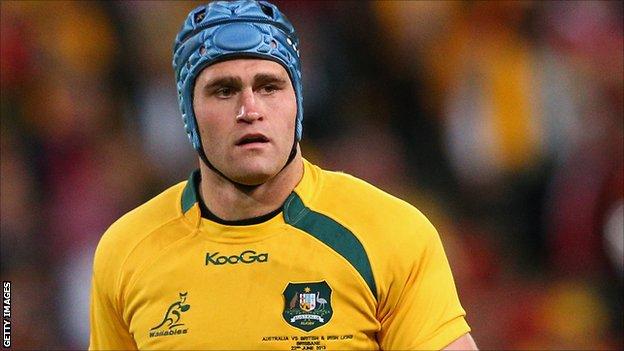 Australia captain James Horwill says his contact with Alun Wyn Jones during the first British and Irish Lions Test was a "complete accident".

Horwill faces an International Rugby Board appeal against a decision which cleared him of stamping or trampling.

He was cited after his boot came into contact with the head of lock Jones during the opening Test in Brisbane on Saturday, which the Lions won 23-21.

"There was no intent and no malice in anything," he told a news conference.

Horwill was cleared at a disciplinary hearing on Sunday when judicial officer Nigel Hampton QC decided he could not be certain the act was intentional.

However, rugby's world governing body will contest the decision at a date to be set, following Saturday's second Test in Melbourne, for which Horwill is free to play.

"The original hearing took four hours and there were nine camera angles to look at. I had a fair hearing the first time and I expect it to be no different next time," Horwill said.

"It was a complete accident, which unfortunately happens in rugby. I had no idea anything had happened until I was cited."

An IRB statement says player welfare is at the heart of its decision, with Canadian barrister Graeme Mew hearing the appeal.

Under the rules, the IRB has the right to appeal disciplinary decisions, but it has never previously invoked the rule for a not guilty verdict.

Australia head coach Robbie Deans has named his captain in the squad for Saturday's Test.

"I have had a lot of experience of these processes," said Deans. "I was part of this one and privy to that, but I can't discuss it publically.

"We were satisfied with the process; we felt it was just and fair. As a result, James is available this week."

Replays of the third-minute incident showed Horwill bring his right boot down onto the head of Jones, who was lying at the bottom of a ruck and later required stitches above his eye.

Horwill made his debut for Australia against Fiji in 2007 and has since gone on to win 35 caps. He was making his first international appearance for 18 months against the Lions after 10 months out injured with a hamstring problem.