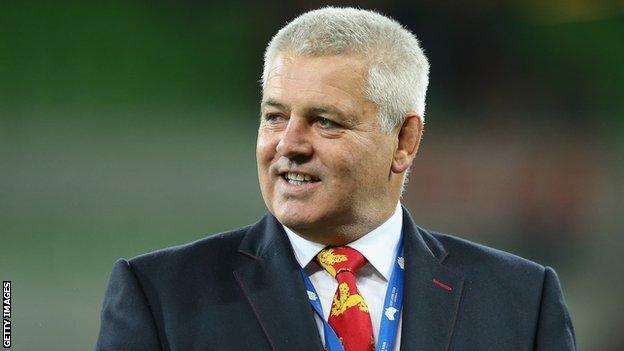 We're in Aussies Rules country now - the state of Victoria is obsessed with it. Eight of the 18 teams in the Australian Football League hail from the smallest of

And with Jobe Watson - captain of one of the biggest clubs, Essendon - admitting he took a banned substance which he thought was legal, together with the not insignificant news that Barry-born Australian Prime Minister Julia Gillard has been deposed, the column inches devoted to the Lions have shrunk in recent days.

But for those who know about rugby, we are just days away from one of the most seismic events in the history of the sport.

In the eyes of many, Lions tours represent the pinnacle: more historic than World Cups, more rare than Six Nations Championships, and notoriously hard to emerge successfully from. The 2013 tourists are 80 minutes away from doing just that.

I spent Thursday morning in the company of a number of Welsh Lions, all of whom told me that being part of a Lions series victory would eclipse anything they'd achieved in the game.

And these are men who've won Grand Slams, and come within a whisker of the World Cup final. That's not to devalue those other achievements. But Lions tours are special and winning Lions tours magical.

While the scriptwriters and the neutrals would fancy a squared series going into the final test in Sydney on 6 July, there's no doubt the Lions are looking to finish the job on Saturday.

Those I spoke to on Thursday exuded a quiet confidence, with skipper Sam Warburton saying he felt the Lions had plenty more to give.

It's been quite a week for Warburton's back-row buddy, Dan Lydiate. Named captain of the Lions for Tuesday's game against the Melbourne Rebels, two days after he was picked in the starting line-up for the second test.

That's pretty good going for a Radnorshire farm boy who grew up a long way from Wales's rugby heartlands.

And it shows that Warren Gatland wasn't paying lip service when he said those who played well on Tuesday still had a shot at glory on Saturday.

Gatland has never been afraid of making big calls - and he's made a couple of big ones ahead of the second Test.

Lydiate said that while there were a lot of hugs and handshakes following the team announcement, there have also been a number of consoling arms around shoulders.

Spare a thought for Alex Cuthbert, the man whose try last week turned the game for the Lions.

Tommy Bowe's return from a broken hand means Cardiff Blues and Wales flier Cuthbert has been relegated to the bench.

And Mike Phillips - strutting, ebullient Mike Phillips, who was a standout player four years ago - finds himself shut out altogether.

It's an indication of the firepower Gatland has at his disposal.

But there was little in the way of fighting talk on the day the team was announced; just a steely acknowledgement that the Lion has its foot on the Wallaby throat, and intends to go in for the kill on Saturday.