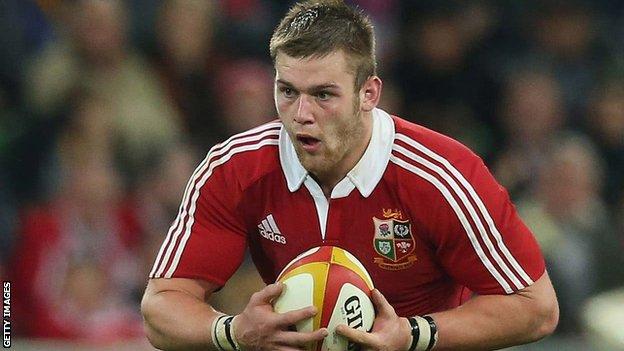 Flanker Dan Lydiate will cap a "dream" week by starting for the British and Irish Lions in the second Test against Australia in Melbourne on Saturday.

The Welshman, who played the last eight minutes in the 23-21 first Test win in Brisbane, replaces Tom Croft as blind-side flanker.

Former Newport Gwent Dragons forward Lydiate then led tourists to a 35-0 win over the Melbourne Rebels on Tuesday.

"[I was] captain of the midweek side and now the call to start is just a dream come true.

"I have to back it up now and make sure I put in a good performance."

Lydiate is one of five changes made by Lions coach Warren Gatland to the side which took a 1-0 lead in the three-Test series after beating Australia in Saturday's opener.

Lydiate, 25, is delighted Gatland has been as good as his word and rewarded players for their midweek performance against the Rebels.

"Gats made it quite clear to everyone playing in the week it was a chance to put our hands up," said Lydiate.

"I came off the bench last week [first Test], only getting eight minutes and I couldn't really do a lot.

"I just knew Tuesday was a big chance to put my hand up and do what I do best and all the boys were trying to do the same.

"There were no tries against us and no score, which is even better."

Lydiate's Lions Test call-up caps a remarkable return to the international arena after an ankle injury playing for the Dragons in September ruled him out of nine Wales games last season.

He missed all of Wales' 2013 Six Nations title-winning campaign and played only five Pro12 games at the end of the season before the Lions tour.

Lydiate, the 2012 Six Nations Player of the Tournament, has gone on to play six times for the Lions on tour.

"This is my chance and I am just excited now," he said.

"But there is a long way to go in this tour and there is another game next week.

"For the starting XV and the 23-man squad this is our chance, a massive chance and I am really looking forward to it. Hopefully, we can get the job done now."