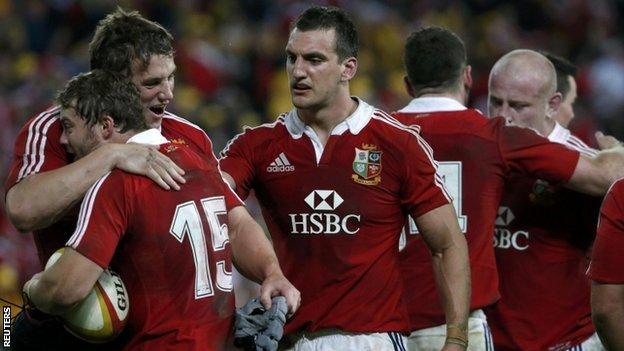 Captain Sam Warburton has underlined the British and Irish Lions' intent to complete a series win in Saturday's second Test and avoid a decider.

The Welsh flanker acknowledged his "nervous excitement" knowing that victory in Melbourne would seal a first series victory since 1997 after the Lions beat Australia 23-21 in the Brisbane opener.

"The game can't come quick enough. The talk among the players has been to make sure we finish it this weekend," said Warburton, 24.

"It's been quite strange waking up knowing that this time in five days, then four, three and now two, you could be a Test series winner."

The Lions have made five changes to their starting side, with wing Tommy Bowe, scrum-half Ben Youngs, flanker Dan Lydiate, lock Geoff Parling and prop Mako Vunipola all coming into the side.

Warburton, who has led Wales to a World Cup semi-final and a Six Nations Grand Slam decider, believes Saturday's clash at the Etihad Stadium "will be the biggest game of my life".

"The potential achievement will be something that no-one has achieved for the last four tours," he said.

"But that is something we are really looking forward to and I love that. The players are in the squad because they perform well in the biggest games.

"Normally, you are pretty nervous in the week going into a big game for your club or country, but the feeling ahead of this one is complete excitement, knowing what you could achieve.

"But we know we are going to have to do something special to make sure we do that. There is no complacency thinking there is another opportunity next week, because the momentum would completely swing.

"[Australia] would go into another home match to finish after winning a game, so we definitely want to finish it off this weekend, and the players are ready to do that."

Australia, who have brought full-back Kurtley Beale and wing Joe Tomane into their side but retained James O'Connor at fly-half, will be fighting to keep the series alive at the same stadium in Melbourne's docklands where they beat the Lions 35-14 in the second Test in 2001 before going on to win the series.

"They will bounce back," added Warburton. "They were only a kick away from winning last week, so they know they have got every chance of getting the series back. If it was us who were 1-0 down, we would believe we could pull it back.

"Australians being Australians, they are probably optimistic because they are great competitors. They won't feel down and out. I imagine they will come out firing.

"It is all or nothing for them, so we expect a huge performance."