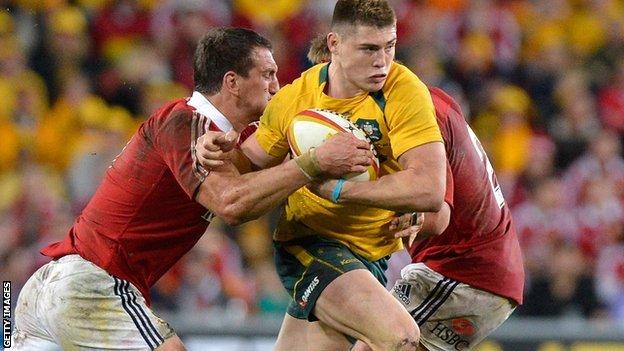 Australia have retained James O'Connor at fly-half for Saturday's second Test against the British and Irish Lions in Melbourne.

O'Connor struggled in the 23-21 first Test defeat but remains at 10 with Kurtley Beale starting at full-back.

Beale, who missed a last-minute penalty that would have given the Wallabies victory in Brisbane, replaces the injured Berrick Barnes.

Joe Tomane takes over from the injured Digby Ioane on the left wing.

Centres Christian Leali'ifano, who was knocked out in the first minute of the series opener, and Adam Ashley-Cooper, who suffered a shoulder problem, have both been declared fit to start at the Etihad Stadium.

Leali'ifano, who has undergone extensive post-concussion tests required by International Rugby Board protocols, said he had suffered only a "few minor headaches" since.

"I remember most of it," he said. "The hardest thing was when the doctor asked me what the (New South Wales) 'Tahs-Lions score was two weeks ago. I struggle to remember that now. I was hoping they would ask me who my mum and dad were or something!

"There were no serious side effects."

Leali'ifano will take on the goal-kicking duties he was due to assume last week, with O'Connor (two out of five) and Beale (two out of four) struggling in his absence.

Australia coach Robbie Deans said he did not consider moving O'Connor from the pivotal role, despite his struggles last week when the Wallabies lost first Leali'ifano then his replacement Pat McCabe outside him.

"It was very tough circumstances last week with all the disruption," the coach noted.

"While the performance wasn't perfect, it is a team game and he is part of that, as are others. He will be much better for having an extra week's preparation, and having a specialist alongside him."

With Beale promoted to the starting line-up and McCabe suffering a neck injury in the first Test that will rule him out for the rest of the year, uncapped ACT Brumbies full-back Jesse Mogg and New South Wales Waratahs centre Rob Horne come onto the replacements' bench.

Tomane, who was born in New Zealand but raised in Australia, wins just his second cap, after a string of injury setbacks since his debut against Scotland a year ago.

The 23-year-old returned to rugby union last year after four seasons in rugby league. He played for Melbourne Storm in 2008 alongside Israel Folau, who remains at right wing after two tries on his Test debut in Brisbane.

The Wallabies pack is unchanged, with tight-head Ben Alexander poised to win his 50th cap. The 28-year-old becomes only the fourth Wallabies prop to reach that milestone, after Al Baxter (69), current front-row partner Benn Robinson (57) and Ewen McKenzie (51).

O'Connor was pictured with Beale at a fast-food outlet at nearly 4am on Wednesday morning, after earlier saying he was preparing for "the biggest game of his life".

Deans conceded the lateness of the hour, four days before such a pivotal encounter, was "not ideal" even if the players did not directly break any team protocols.

"We have had conversations for sure," he said. "It is not best practice in terms of sleeping habits.

"I understand they were keen to catch up with club-mates, but I am sure the senior player group will be considering whether we need to make it more difficult."