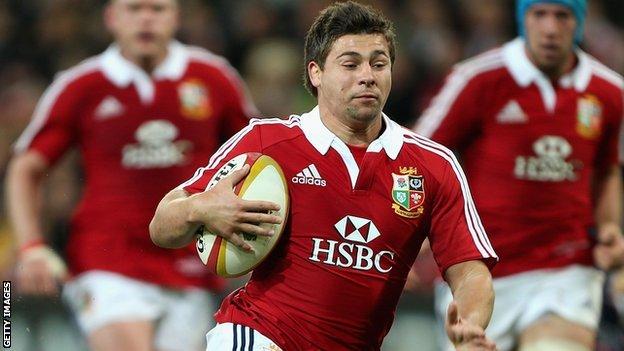 Flanker Dan Lydiate also comes in, with Tom Croft dropping to the bench.

The Lions lead the three-Test series 1-0 after beating Australia 23-21 in Saturday's opener in Brisbane.

Bowe, who started all three Tests for the Lions in South Africa four years ago, has made a remarkable recovery from an injury that medics initially feared would rule him out of the rest of the tour.

The Ulsterman, who will wear a hurling glove for extra protection on Saturday, had three screws inserted into a fracture of his second metacarpal, the long bone in his right hand.

"Tommy is obviously a quality player and has made a fantastic recovery from injury," said head coach Warren Gatland. "The medics have done a brilliant job getting him fit and he has slotted in really well this week."

The versatile 29-year-old will also cover full-back should anything befall Leigh Halfpenny, with Cuthbert - who scored the Lions' second try in the win in Brisbane - on the bench.

Gatland said Phillips was "fit and available", although the Welshman - who started all three Tests in South Africa - has not been able to take a full part in training with a knee injury that also hindered him in the first Test.

"The decision was to rest him this week," Gatland explained. "He is potentially an important component for next week. Given the quality of the nines we have got, all of them have done a great job for us. We felt it was prudent to make sure he was 100% fit for next week."

Phillips's replacement, Englishman Youngs, came on for the final quarter in Brisbane and scored a fine solo try in Tuesday's 35-0 win over the Melbourne Rebels.

The 23-year-old and elder brother Tom, 26, who starts at hooker, will become the first brothers to play a Test together for the Lions since Gavin and Scott Hastings in the final Test of the 1989 series in Australia.

Lydiate will add a harder edge at the breakdown, where Australia blind-side Ben Mowen was a thorn in the Lions' side in Brisbane, with the hosts desperate to ensure the series goes to a decider in Sydney.

"This is a do-or-die match for Australia," Gatland added. "It is going to be a real battle out there and we have decided to add a bit more physicality to our side up front, and Dan brings that. Then we have got the explosiveness coming off the bench with Tom Croft and Sean O'Brien."

The inclusion of Lydiate leaves the Lions without specialist second-row cover among the replacements, but either Croft or Lydiate will fill in if required.

Lock O'Connell suffered a fractured arm in Brisbane which has ruled him out of the final two Tests, while Corbisiero is expected to shake off a calf strain before the third Test in Sydney.

Parling, who has only started one game on tour - against the Reds - and appeared as a replacement in four more, came on for the final 10 minutes of the first Test victory.

Although two of the changes were enforced, Gatland says the decision to make three more indicates the strength in depth of the squad.

"I don't know about not changing a winning side; it is about picking the best team to do the job for us," he added.

"We can win this series by winning on Saturday and that is what our whole focus needs to be. The last thing we want to do is think about it being 1-1 and having to play another game in Sydney. Everything for us is about Saturday night."