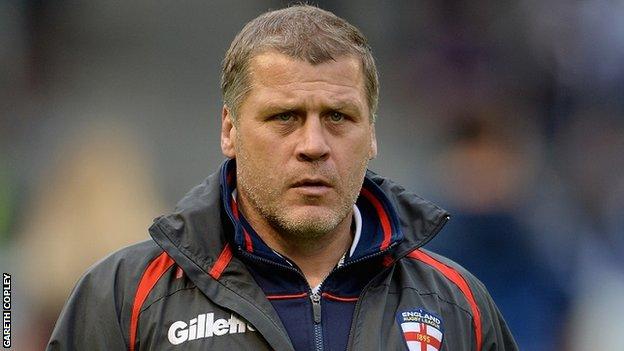 Rugby league legend James Lowes insists he can steer Leeds Carnegie back to the Premiership after being made head coach of the rugby union outfit.

Lowes will leave his job as assistant coach to both Super League champions Leeds Rhinos and the England rugby league team to take up his new role.

He said: "I have always enjoyed rugby union both as a player and a coach."

Whilst some may believe this is a bold move, we are confident it is the right move for our club to take us forward

Lowes, who played for Hunslet, Leeds and Bradford during his highly successful rugby league career, had a short spell with West Park rugby union club in Leeds at the end of his playing days.

He has also spent time last season working alongside former Carnegie head coach Edwards, but the club's director of rugby Chris Gibson acknowledged eyebrows would be raised at the appointment.

"This was a big decision for the club and for James himself," said Gibson.

"We are aware of his undoubted strengths as a coach from seeing him first hand with the Carnegie squad over the last 18 months and, whilst some may believe this is a bold move, we are confident it is the right move for our club to take us forward, not just for next season but hopefully for many years to come.

"People may point to his lack of experience in top flight rugby union coaching however we are fortunate here at Leeds Carnegie to have Sir Ian McGeechan on our board and I am sure they will have a close bond given both men's passion for coaching and developing the players in their charge."

McGeechan, who is chairman of Leeds Carnegie, said: "I have often spoken since my return to the club about the unique environment and opportunity we have here at Leeds Rugby to take advantage of the cross code nature of our club and certainly the appointment of James can only strengthen that bond.

"James is an extremely talented, young coach who has the respect of our entire squad."