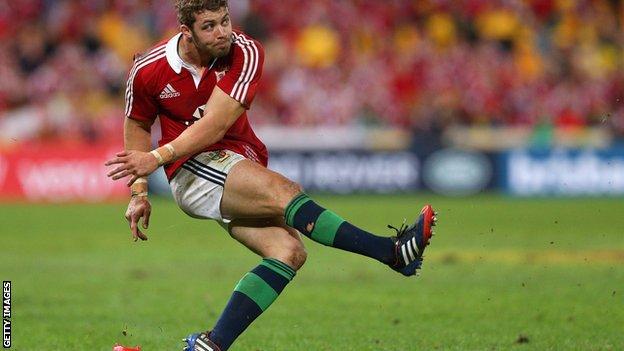 Neil Jenkins has hailed the British and Irish Lions goal-kickers for their superb form on the tour of Australia.

Leigh Halfpenny, Owen Farrell, Jonathan Sexton and Stuart Hogg have landed 55 out of 64 shots at goal between them.

"Where Australia's kicking failed them at critical junctures, the Lions had the reassuring right boot of Leigh Halfpenny, who nailed five out of six.

"That's 27 from 29 on tour now. It is a shock when he misses, whatever the distance or angle."

Their importance was shown in the visitors' opening Test win, as Halfpenny excelled with the boot while Australia saw 14 points go begging.

"We are lucky to have the kickers we have," the Lions kicking coach said. "They are the best of the best."

First-choice goal-kicker and full-back Halfpenny has enjoyed a success-rate of 27 from 29 this summer, with reserve fly-half Owen Farrell succeeding with 18 of his 19 attempts.

Opponents Australia's struggles in front of the posts at the weekend was exemplified in the final minute when Kurtley Beale - who had taken over the duty from the wayward James O'Connor - slipped as he missed a penalty that would have won them the game.

"It generally is goal-kicking that wins or loses Test matches," Jenkins - who also works with Halfpenny in his role as Wales' kicking coach and is the nation's record international points-scorer - added.

"Leigh gets nervous now and again, gets on top of himself and needs to stand back. But for a lad of his age, he's done fantastically well already and is maturing all the time.

"Overall, we are fortunate in the quality of kickers we have. All have come on at times and done their jobs. We've had the occasional miss, but that's normal."