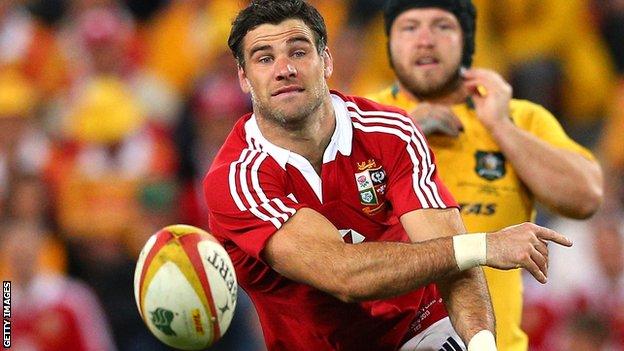 Wales great Gareth Edwards says scrum-half Mike Phillips should retain his place in the British and Irish Lions team for the second Test against Australia.

Former Lions scrum-half Matt Dawson says the Wallabies have worked out Welshman Phillips and that Ben Youngs should start in Melbourne.

"I think he brings that physicality to the game, especially in that opening 40 minutes to an hour."

Edwards, who toured with the Lions in 1971 and 1974, continued: "He'd be the first to admit he wasn't at his best last week and he did suffer by comparison with [Australia scrum-half] Will Genia, who was quite outstanding.

"I can see where Matt Dawson is coming from. Ben Youngs has played particularly well on tour [but I would start with Phillips and] bring Youngs on when the game has opened up."

In the Lions' 23-21 first Test win in Brisbane, Phillips was replaced by the Englishman after 62 minutes.

Dawson, who played in seven Test matches on three tours for the Lions, said the Wallabies had deliberately set a trap for Phillips, encouraging his naturally aggressive style.

"The Australians are renowned for their homework and they got hold of Mike Phillips," Dawson said.

"The Aussies were fooling him. I think the Aussies maybe worked him out a little bit."

The Lions team for the second Test in Melbourne will be named on Thursday.

The Australian Rugby Union has confirmed the roof will be closed at the Docklands Stadium for Saturday's game.