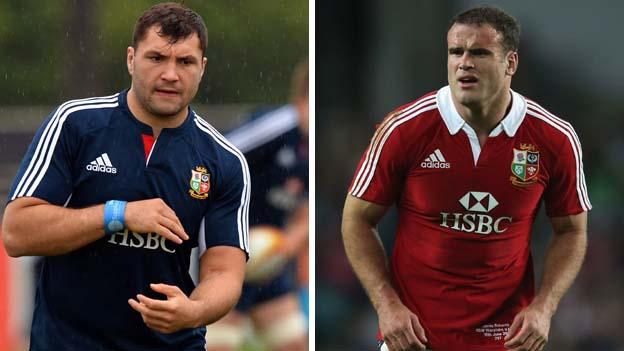 British and Irish Lions coach Warren Gatland is resigned to being without prop Alex Corbisiero and centre Jamie Roberts for Saturday's second Test against Australia.

Corbisiero is "struggling a little bit" to overcome a calf injury picked up in the first-Test victory in Brisbane.

Gatland said Roberts "is in the same boat" with a hamstring strain.

"We will see how they are on Thursday, but at this stage it is a little bit doubtful," he added.

But with Ireland's Tom Court only called up as short-term cover for Corbisiero, the Lions will ponder summoning additional reinforcements at loose-head prop, with Mako Vunipola and Ryan Grant the only fit options.

"It is something we will discuss over the next 24 hours to see if we have got enough cover in that position," Gatland said. "The medics say if he is ruled out for this weekend, he will definitely be fit for the third Test."

The Lions have already summoned eight replacements - including temporary cover in Shane Williams and Court - since they left the UK, equalling the record number used on the 1980 tour to South Africa.

In all, 44 players have been involved at some stage in the eight games so far, with injury victim Gethin Jenkins the only member of the original squad not to be involved.

Lock Paul O'Connell, ruled out of the rest of the series with a fractured arm sustained in the first-Test victory in Brisbane, will remain with the squad for the remainder of the tour.

"He played such an important role in that first Test, so we gave him the option to stay, and he wanted to stay," Gatland said. "I feel really sorry for Paul and it is a big loss for the squad because he was playing some of his best rugby for a long time and that combination with Alun Wyn Jones was proving to be really strong.

"But he has been around for such a long time and he has that experience and wisdom, so I am sure he will be involved in some aspect."

After the disappointment of last week's 14-12 defeat by ACT Brumbies in Canberra, Gatland was pleased by a "professional, workmanlike performance" from his midweek side as they scored five tries and kept the Rebels scoreless in Melbourne.

"I thought the back row were very good. Richie Gray had his best game on tour, Richard Hibbard carried the ball well, both nines [scrum-halves Conor Murray and Ben Youngs], were good, Sean Maitland was good, the defence was outstanding and everyone kept working hard," he said.

"The pleasing thing was the spirit they displayed. That really showed how good these guys have been on and off the field on this tour, and that was demonstrated by not conceding any points.

"There is still an opportunity for people to be involved [in the remaining Tests] and there are bound to be a few more injuries between now and the final Test.

"But even if these guys don't get selected for the next two Tests, they can still be proud to be part of hopefully a successful tour. That is the whole aim. These guys have been fantastic ambassadors for the four home unions, and everyone back home should be really proud of the way they have conducted themselves on and off the field."