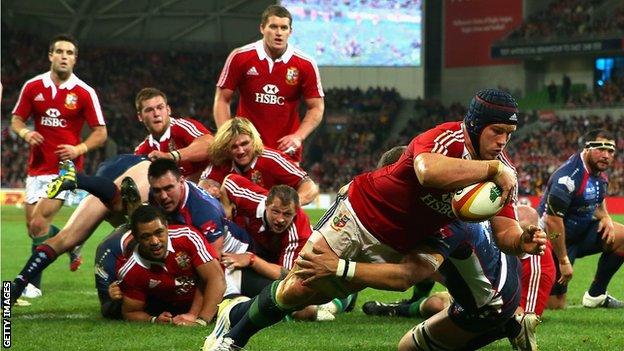 The British and Irish Lions warmed up for the second Test against Australia with an ultimately convincing victory over an outgunned Rebels side in Melbourne.

Converted tries from Conor Murray and Sean Maitland in a patchy first half gave the tourists a 14-0 lead at the interval.

"Sean O'Brien, the man of the match, must have exploded into the Lions squad for the second Test. He scored a great try from a line-out, crashing over. This will be a good boost for the Lions for Saturday - it is encouraging that the midweek team are back on the winning trail."

Sean O'Brien and Ben Youngs added further scores either side of a penalty try as the Lions pressed home their superiority.

Keeping a game and committed Rebels side scoreless was a tribute to the Lions' second string in the final midweek match of the tour.

Whether any player did enough to play their way into the starting side on Saturday is debatable, although Tuilagi proved his trademark power was intact on his return from a shoulder injury.

While it was far from error-free, and the Lions spurned several more opportunities to add to their score, there was far greater purpose and intensity than the miserable effort in the 14-12 defeat by ACT Brumbies in their last midweek match.

After some early line-out woes, with two of their first three failing to hit the target, the Lions started to dominate possession and territory, with Tuilagi prominent in attack.

After winning a penalty from their first scrum, they demolished the Rebels in another, paving the way for Murray to scramble over in the right corner after Faletau was held short.

They might have had a second moments later after establishing another strong position in the Rebels 22, but a Dan Cole fumble halted momentum.

It was an untidy few minutes from the England tight-head, who then proceeded to knock on, before the Lions were penalised for collapsing a scrum.

O'Brien, perhaps over-eager to show he should be in the Test squad, conceded an unnecessary penalty, but with Rebels full-back Jason Woodward unable to capitalise, the Ireland flanker promptly showed a more enterprising side to his game.

A neat offload to Tuilagi on the left wing allowed the powerful centre to scatter defenders and pave the way for a fine team try. Faletau slipped as he cut against the grain in front of the posts, but the ball was swiftly recycled and Simon Zebo sent Maitland over for an excellent score.

Farrell converted both tries for a 14-0 lead after 28 minutes and it stayed that way until half-time.

Rebels centre Mitch Inman twice threatened to breach the Lions' defence and the hosts kicked a penalty to touch but Evans, enjoying his best game of the tour so far, got up to steal it.

The Lions should have added to their tally early on the resumption but Maitland arrowed a long pass straight into touch rather than into the arms of the waiting O'Brien, who looked suitably unimpressed.

But the Irish flanker did not have long to wait for his try, powering over from Lydiate's short pass after Faletau had won a line-out close to the Rebels' line.

Farrell's third conversion made it 18 out of 19 on tour for the Lions before he was removed from the fray intact, with Saturday's second Test in mind.

The Lions were then awarded a penalty try after Evans won a line-out and the Rebels pulled down the maul, replacement Jordy Reid earning a yellow card for his efforts.

But despite their man advantage, the Lions were forced to scramble in defence, Zebo smashing Nick Stirzaker into touch after the replacement Rebels scrum-half broke away up the right flank.