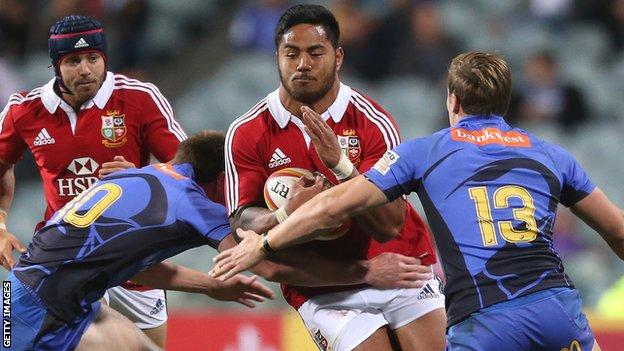 The England centre starts against Melbourne Rebels on Tuesday, barely two weeks after fearing his tour was over.

After a promising outing against Western Force, Tuilagi, 22, was forced off after 20 minutes against Queensland Reds with a "stinger" to his shoulder.

"If I'd gone home it would've been the most disappointing thing," he said.

"The Lions doesn't come around very often, and you've got to take your chances. Thank God, the shoulder healed up pretty quick.

"The physios and the coaches gave me seven days to make the tests to see if my shoulder had any improvement in power.

"Luckily, after a couple of days, it came back 20-25%, which was an improvement, and then they just gave me another week. It feels a lot better now."

In the absence of both Tuilagi and Jamie Roberts, Jonathan Davies and Brian O'Driscoll started together in midfield in the first Test victory in Brisbane.

But with Gatland expected to formulate a tighter game-plan on Saturday, a fit-again Tuilagi may be a tempting option as a battering-ram centre capable of generating gain-line momentum.

If Tuilagi proves his fitness on Tuesday in the final mid-week game of the tour, the in-form Davies could find his place under threat, with compatriot Alex Cuthbert also a potential casualty now Irish wing Tommy Bowe is available again.

With lock Paul O'Connell's tour over with a fractured arm, and prop Alex Corbisiero a major doubt for the second Test with a calf problem, the Lions may make at least four changes to their side.

Forwards coach Graham Rowntree confirmed Geoff Parling - withdrawn from the Rebels match - will take over from O'Connell, with Mako Vunipola likely to start if Corbisiero doesn't make it, although Scottish prop Ryan Grant could also enter the equation with a strong performance on Tuesday.

Fellow front-rowers Richard Hibbard and Dan Cole, both on the field in Brisbane when the Lions lost their own put-in at one scrum and then conceded the penalty in another that might have cost them victory in the last minute, will be keen to make amends in Melbourne.

Lock Ian Evans - a late call-up to the starting side after Parling's withdrawal - now has a chance to force his way onto the bench for the second Test after a slightly underwhelming tour so far.

The Lions will also be praying Owen Farrell comes through the game unscathed with no other specialist fly-half cover for Jonny Sexton in the squad.

Flanker Dan Lydiate, who could yet force a change in the make-up of the Test back row, will lead a side determined to bolster Gatland's options for both this Saturday and the final Test in Sydney.

"It was a massive win for us at the weekend and we have a chance now to prove ourselves and keep that momentum going towards what is going to be an even bigger test this weekend," said the Welshman.

The Rebels are missing four Wallabies but include three capped players in their match-day squad, with scrum-half Luke Burgess starting his first game on his return from France, and former Wales international Gareth Delve leading the side from number eight.

"It will be a fierce hit-out, which is just what we need at the moment," said Lions assistant coach Graham Rowntree.

"We've said that right from the outset that the attitude and intensity of the midweek team makes the (Test) series.

"On Saturday, they were the ones who were straight into the changing room congratulating the lads. Then they are the guys who have to get up straightaway on Sunday morning to train.

"Their attitude has been impeccable so far."