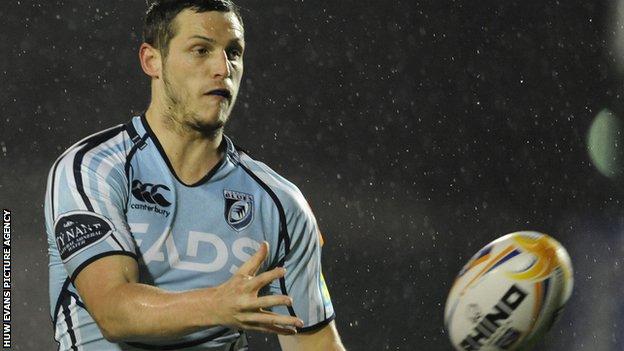 The 24-year-old fly-half failed to establish himself at the Blues and has been to return to Rodney Parade.

"It could have gone the opposite way and I could have pushed on and been on the [Wales] tour to Japan," said Tovey.

"But I'll admit to myself it was a bit of a mistake leaving but I'm glad to be back here [at the Dragons] now."

Tovey's prospects at the Blues were hindered by the emergence of teenage fly-half Rhys Patchell.

The 20-year-old produced a man-of-the-match performance in his first start against the Dragons last season and continued to impress throughout the season.

Those performances earned Patchell a place on the Wales tour to Japan, where he won two caps as a replacement, while uncapped Tovey was again overlooked.

"Fair play to him, he took his chance," said Tovey, who started in only 13 games for the Blues last season.

"I would have liked to have a few more games than what I did but you can't take it away from him how well he's done this year.

"I looked at next season and thought it was probably going to be the same so I thought to myself that working under [Dragons coach] Lyn Jones again would be a second chance for me and hopefully I can take my game to where it was just before I left."

Jones targeted Tovey almost immediately after being appointed the Dragons' new director of rugby. The pair worked together during Jones' brief spell at Rodney Parade during the 2008-9 season as the region's attack coach.

"As soon as I got the phone call I wanted to come back here," Tovey added.

"Even if Lyn wasn't the coach I would've still thought about coming back here. If I had seen my contract out at the Blues, the first place I would have looked to come back to was here."

Despite being away from the Dragons for just one season, Tovey says he has already sensed a "more professional" approach as the squad begin their pre-season training.

And he is adamant they can end their traditional tag of being the weakest Welsh region.

"This club has got the potential to be the first or second region. We've got to look past being fourth and pushing for third," he said.

"If you're going to set your standards, you've got to set them to be the best region in Wales.

"The way the club's going and the signings they made before I arrive with Kris Burton, [Netani] Talei, [Martin] Muller, Rhys Thomas, Richie Rees - this club has definitely got potential to move forward next season."