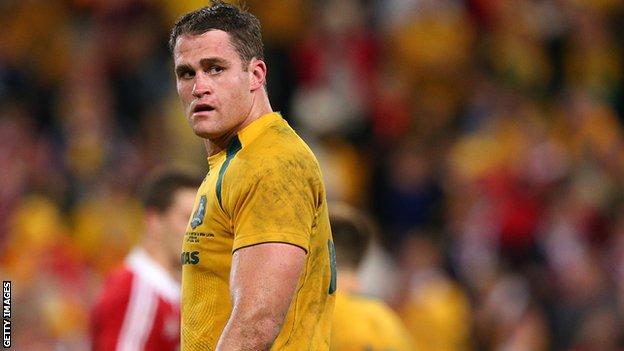 - What he makes of the decision to clear James Horwill

- Who is better out of George North and Israel Folau

- What he made of the refereeing in the first Test

- Who he'd like to see in the Lions midfield on Saturday

Jerry answers questions posted on the website at the start of every week - entries are now closed for this Q&A and this week's answers appear below. Look for the Ask Guscott story next Sunday to ask Jerry a question.

How on earth did the citing panel clear Australia captain James Horwill of stamping on Alun Wyn Jones? blueted1976

When I first watched the incident I thought Horwill (pictured above) would be banned for a long time, it appeared as though he looked down at Jones and lashed out with his boot at the Welshman's head.

Judicial official Nigel Hampton QC, a New Zealander, explained: "I could not reject as implausible or improbable Horwill's explanation that, as he was driving forward with his right leg raised, he was spun off balance through the impact of the Lions players entering the ruck from the opposite side.

"In an endeavour to regain his balance, Horwill brought his right leg to the ground unknowing that Jones's head was in that area, due to having his sight impeded by Michael Hooper and Tom Croft, who were beneath him and over the top of Alun Wyn Jones."

Hampton would have the help of all camera views, which we don't. However, it still looks very dodgy to me and I think Horwill has had a fortunate escape in not being banned. I don't know what his disciplinary record is like, but it looked reckless to me.

Who is the better wing - George North or Israel Folau? Mr_Wood

It's difficult to separate these two. Both had fantastic games on Saturday, scoring great tries that will be remembered for a long time. North, despite still only being 21, has been around longer and has already established his reputation as a world-class winger.

Rugby league convert Folau has pedigree from his NRL days and showed at the weekend that he will continue to prove his class now he is in the 15-man code. Both are incredibly talented and I would measure their ability as equal.

What was your view of the refereeing in the first Lions Test? Sir Warren

Chris Pollock didn't have his best day and some of his decisions were confusing to say the least. Overall he got more right than wrong, which is mostly the case with referees.

I thought he was wrong to penalise Brian O'Driscoll when the Lions were attacking - Will Genia then tapped and went and Australia scored. That looked for all the world a penalty to the Lions, because two Aussie players fell on top of O'Driscoll and were off their feet.

Some decisions look bad because we get the advantage of slow motion and it's important to remember referees don't, but they are paid professionals and need to get close decisions right. In the main they do.

How important was the loss of Jamie Roberts and Manu Tuilagi to the Test side? Our midfield made very few breaks and could one, or both, of them returning help fix this problem? Croftalicious

Who would be your centre partnership be for the second Test if Tuilagi and Roberts are fit? Gokikia

Both Roberts and Tuilagi would have made dents in the Aussie defence but the support didn't quite get the breakdown right at the weekend and that resulted in slow ball, turnovers and penalties conceded.

Jonathan Davies proved his effectiveness in running over Christian Lealiifano in the first minute, so the Lions weren't missing Roberts and Tuilagi too much. However, being ruthless and wanting to put the Aussies away, I believe the Lions need more cavalry to smash into the small Aussie backline.

I don't mind as to which of Roberts or Tuilagi plays because both could do the job, but I wouldn't be disappointed with any combination of the four Lions centres because they have all shown good form on this trip.

What are your views on the front row being substituted relatively early in the game, with no apparent injuries or obvious poor play? GarethGB

Coaches should have reasons for making substitutions - I've not seen the Lions management team's explanations for the front row change at the weekend.

They got it totally wrong on Saturday because the new front row were totally underwhelming, hence they are all playing on Tuesday. I can only assume loose-head Alex Corbsiero must have been injured.

After the shocking performance from Mike Phillips, should the Wales scrum-half be dropped in favour of England's Ben Youngs or will he keep his place in the first XV? ArthurDayne

It wasn't Mike Phillips's finest 70 minutes of international rugby but he's proven over the years that he's up there with the best.

One poor game doesn't always mean you should be dropped and I would stick with him but make it clear he needs to deliver quick ball rather than get caught in possession. In his defence he wasn't given very much quick ball by the big lads.

Who were the outstanding players in the first Test? Not2serious

Lions hooker Tom Youngs was outstanding. Who would have ever thought a year ago this man would be starting the first Test? It's great to see that the Lions can always create stories about inexperienced players coming through - and prove they deserve a Test spot. He was a centre just a few years ago!

Will Genia was right up there too. He was involved in everything that was good about Australia, his attack and cover defence were world class.

But Folau and North were the stars with their individual brilliance - it was beautiful to watch. I was in the corner where Folau scored his tries and applauded each time.

How would you go about combating Genia? He ran the Lions ragged on Saturday. NJDevilMatt

The defence around the breakdown has to be watertight, with communication right and first tackles made - Genia is brilliant at spotting and exploiting unfocused defenders.

Having said that, you can rehearse all week how to stop Genia but class is difficult to contain.

Do you think that Sean O'Brien should replace Tom Croft on the blind-side? He has been a fantastic performer on the tour and would also give a much better balance to the back row? the big man

I wouldn't swap Croft for O'Brien but I would have the Irishman on the bench instead of Dan Lydiate. The Leinster player can cover all positions in the back row.

Do you think Alex Cuthbert has done enough to hold on to his Test spot now that Tommy Bowe is available? Weejim

I would keep Cuthbert in the team and have Bowe on the bench instead of Sean Maitland.

How can the Lions improve their cutting edge? They had a few decent chances to score and didn't make the most of them. Colski

In the 38th minute Corbisiero made a break and passed to Croft, the Lions secured quick ball and had six versus four. They should have scored but butchered the chance. Quick ball is the key or you are relying on individual brilliance.

Much has been made of James O'Connor's raw talent and his future prospects of playing fly-half for Australia. Any thoughts on his performance in the first Test? Andrew

It was a big ask to get O'Connor to run the show. He tried but wasn't convincing, I thought he looked more dangerous running further out than at 10.

Berrick Barnes, Christian Lealiifano and Pat McCabe are all very unlikely to play next week given the nature of their injuries. I also think O'Connor at 10 wasn't a success and he will play in a different position. What do you think the Australian backline will look like next week? Dannyboy

Why do Australia play a natural 15 (O'Connor) at 10 and a natural 10 (Barnes) at 15? Neither looked comfortable in their allotted positions. Would Australia not be a much more intimidating side with Quade Cooper and Kurtley Beale starting? TJ

It seems clear Cooper won't be starting or even involved with the Australian team while Robbie Deans is still coach. The likely backline I hear is Genia and Beale as the half-backs, Lealiifano and Ben Tapuai in the centres, O'Connor on one wing, Folau at full-back and either Nick Cummins or maybe Luke Morahan, who scored a superb solo try for Queensland Reds in the tour game against the Lions, on the other wing. It's a very capable backline that will test the Lions.