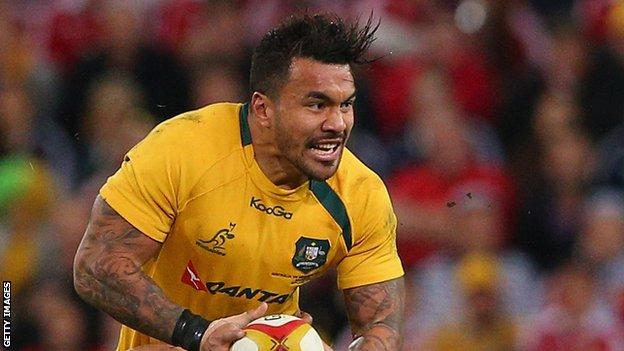 Australia centre Pat McCabe and wing Digby Ioane have been ruled out for the remainder of the British and Irish Lions Test series through injury.

The pair picked up the problems in the Wallabies' 23-21 opening Test defeat.

Ioane, 27, faces potential surgery after damaging his shoulder, while McCabe, 25, has re-injured his neck.

"If the brutality of the collisions wasn't quite on the scale of the second Test in South Africa four years ago, it wasn't far off.

"Lions coach Warren Gatland described it as a 'bit like a sparring match, both teams finding out about each other'. In which case heaven help the players when we get to the championship rounds.

"The body count was huge. But it was Australia, rather than the Lions, who lost four players to injury and ended with others playing out of position."

In further bad news for the hosts, full-back Berrick Barnes has been ruled out of Saturday's second Test in Melbourne with concussion.

Barnes, 27, was knocked out in the first half of Saturday's game during a collision with team-mate Israel Folau.

The Australian Rugby Union [ARU] said they would continue to monitor his recovery and hoped he would be fit for the final Test in Sydney on 6 July.

The setback for Ioane followed news that a warrant had been issued for his arrest after he failed to appear at Melbourne's Magistrates Court on Monday to face an assault charge relating to an incident in March.

The ARU went on to confirm the Queensland Reds player will now "report to Victorian Police and will be issued with a revised court date".

In a boost to coach Robbie Deans's hopes, inside centre Christian Leali'ifano is expected to be available for the upcoming match at Etihad Stadium as he is making an "excellent recovery" from the concussion he sustained in the opening minute of Saturday's match, which was his Test debut.

Fellow centre Adam Ashley-Cooper should also be fit after undergoing scans on his shoulder.

After the bruising first Test, flanker George Smith, a veteran of 110 Tests and the 2001 British and Irish Lions series, was called into the Australia squad along with uncapped full-back Jesse Mogg and Queensland Reds centre Ben Tapuai as injury cover.

The Wallabies team for the game in Melbourne will be named on Thursday.