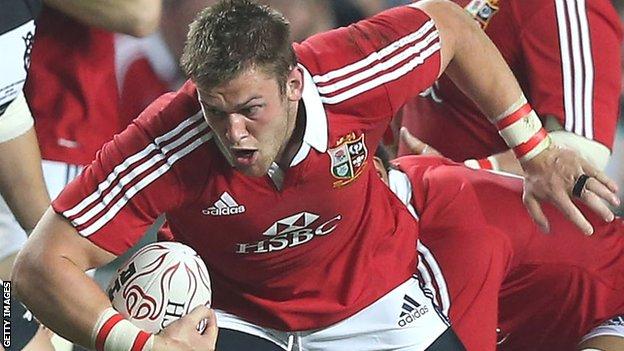 Flanker Dan Lydiate will use to push for a place in the second Test against Australia.

The Wales flanker will captain the team after the forced a re-jig for the final midweek game of the tour.

Lydiate, 25, takes over the captaincy from Geoff Parling, who has been withdrawn from the side.

"I want to push on now and put my hand up for the Test," he said.

Parling's place in the second row is taken by Ospreys lock Ian Evans, with Tom Croft added to the bench.

Lydiate, who will be playing for Racing Metro in the French Top 14 next season after leaving Newport Gwent Dragons, came on in the second half of the Lions' 23-21 first Test win over Australia in Brisbane.

The second Test takes place in Melbourne on Saturday.

"It is massive because we lost to the Brumbies in the last midweek game," Lydiate said. "We have to keep the momentum going now.

"All of the boys want to impress to try to get in the squad for the weekend. There is a lot on this game, especially for us players."

Lydiate is one of three Welshmen, including hooker Richard Hibbard and number eight Toby Faletau, to be named in the clash with the Rebels.

England centre Manu Tuilagi returns from injury for the Lions, having been ruled out of the tour since suffering a neck injury against Queensland Reds on 8 June.

The Rebels will also be captained by a Welshman, back-row forward Gareth Delve.

And Lydiate says he is looking forward to facing the Cardiff-born number eight, who won the last of his 11 caps in 2010 before moving to Melbourne.

"He is a quality player and I am sure he will want to play the best he can, especially against the Lions," Lydiate said.