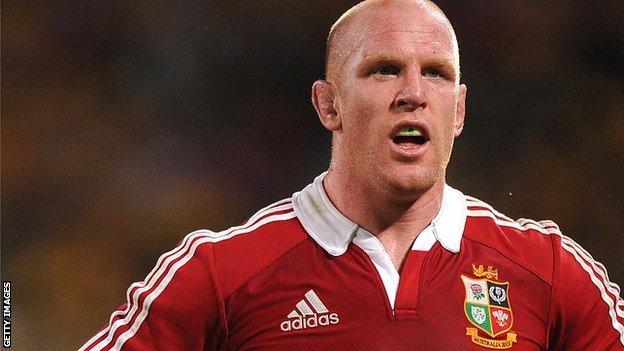 British and Irish Lions lock Paul O'Connell is out of the rest of the tour of Australia with a fractured arm from Saturday's first-Test victory, but will stay on in a supporting role.

England lock Geoff Parling could replace the Irishman in the Test side after being withdrawn from the squad to play Melbourne Rebels on Tuesday.

Alex Corbisiero is being monitored after a calf injury in the 23-21 win.

Ireland prop Tom Court has been called up as cover for England's Corbisiero.

O'Connell, 33, has featured in seven Lions Tests and captained the tour of South Africa in 2009.

Assistant coach Graham Rowntree refused to dwell on O'Connell's enforced withdrawal, but described it as a "massive loss".

"He is one of the best, and he's in the form of his life. He's such a big influence on the group and has been playing exceptionally well. But you have to get on with these things," he added.

The Lions management were keen for O'Connell to remain on tour in a supporting role, as one of the senior and most experienced members of the squad, but left the decision to the player, who made the call on Tuesday.

Rowntree was similarly pragmatic about the decision from a disciplinary hearing on Sunday that cleared Australia captain James Horwill to play in the second Test after a charge of trampling or stamping on Alun Wyn Jones was not upheld.

"It's happened, we move on," the 42-year-old said. "We have enough to get on with the Test coming up on Saturday and we accept that decision and get on with it."

Parling, 29, is expected to step in to replace O'Connell and partner Welshman Jones in the second row at Melbourne's Etihad Stadium on Saturday.

Rowntree said the Leicester forward's potential inclusion from the start would be a reward for his form with the Lions, who are coached by Warren Gatland.

"Geoff has been doing very well coming off the bench and he took his chance when he started as well," he said. "We've got good cover there so it's a chance for him."

Parling had been due to captain the Lions against the Melbourne Rebels, but Dan Lydiate will take that role.

"The loss of O'Connell is - as Rowntree acknowledged - a significant setback, and a sad way for a great player to end his Lions career, on his third tour.

"Sam Warburton may be the captain, but O'Connell was the spiritual heart of the Lions pack. Parling may not have O'Connell's physical presence, but he is a superb line-out technician and a natural leader.

"Losing Corbisiero would weaken the Lions scrum, which creaked in the last quarter in Brisbane after he and fellow prop Adam Jones departed."

Wales flanker Lydiate said: "When Warren Gatland asked me, I didn't hesitate to say yes. It's a massive honour."

Lydiate's fellow Wales international Ian Evans has been selected to start at lock against the Rebels while England's Tom Croft, who started Saturday's opening Test victory, has been named as a replacement.

Australia-born Court, who plays for Ulster, was in his home city of Brisbane this weekend after Ireland's tour of North America.

Court has been named on the bench against the Rebels, and Mako Vunipola has been withdrawn from the squad.

The decision to omit Saracens and England prop Vunipola from the party for Tuesday's match means he is likely to start the penultimate Test if Corbisiero is ruled out.

Rowntree revealed the Lions expect to gain a clearer idea about Corbisiero's availability over the next 24 to 48 hours.

In the centres, Manu Tuilagi (shoulder) and Jamie Roberts (hamstring) are in contention for the second Test after recovering from injury.

Wing Tommy Bowe has recovered from a broken hand sustained against against Queensland Reds 15 days ago.

England's Tuilagi will start against Melbourne Rebels, but Wales international Roberts and Ireland's Bowe are not in the squad for the match at AAMI Park.