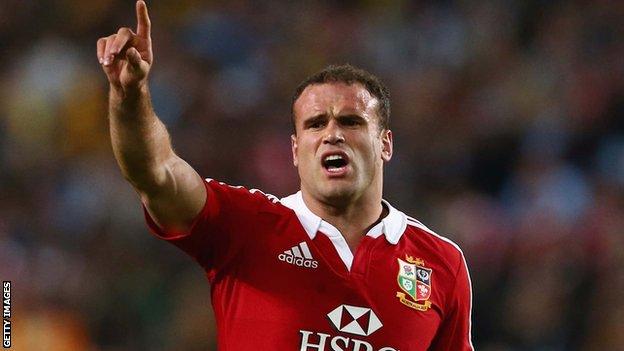 Centre Jamie Roberts is in contention for a British and Irish Lions place for the second Test against Australia.

The Wales Grand Slam winner and Lions Player of the Series in 2009 missed the first Test victory over Australia due to injury.

"I don't think Jamie is too far away. He is potentially in contention for that second Test," said Gatland.

"It is a great tribute to the medical team and fitness staff. The squad is looking healthy, and having almost everyone available is great.

"If you look at Australia, who took a bit of a battering with injuries last night, we are in a good place."

The Lions now face the Aussie Super 15 side, the Melbourne Rebels, in the final midweek game of the tour on Tuesday.

The Lions secured a 23-21 win over the Wallabies in the first Test in Brisbane last Saturday.

Former Wales loose forward Gareth Delve, who won the last of his 11 caps before moving to Melbourne for their debut season in 2010, will skipper the Rebels.

The England centre Manu Tuilagi will face the Melbourne Rebels after suffering a nipped nerve in his neck against Queensland Reds on 8 June.

Dan Lydiate will captain the side following the withdrawal of second row Geoff Parling who is now expected to partner Alun Wyn Jones in the Test team after Paul O'Connell was ruled out of the rest of the tour with a broken arm.

Tuilagi will renew his England centre partnership with Brad Barritt as he bids to return to Test contention for Saturday's second Test against the Wallabies in Melbourne.

While wing Tommy Bowe will not play on Tuesday - to ensure his hand is fully healed - he is available for Saturday.

Elsewhere on Tuesday, Sean O'Brien will return to open-side flanker after two outings at blind-side, with Lydiate at six and Justin Tipuric on the bench.