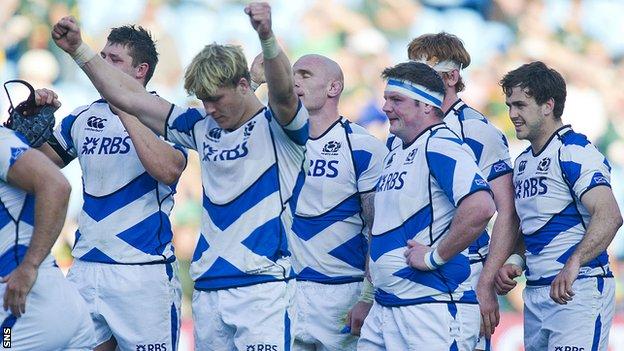 Scotland finished a bruising tour of South Africa with a dramatic but the highlight for Scott Johnson's patched-up squad came against the host nation when the Springboks were given a real scare for an hour.

That the high point of the three-Test journey was is an altogether Scottish conundrum.

Alasdair Strokosch's converted try at the death gave the Scots a 30-29 success and the players used up every last drop of energy they had to celebrate in the high altitude of Pretoria.

However, the on-field party soon gave way to more sombre reflection in the dressing room.

"We were not happy with it," conceded match-winner Strokosch.

"We played well last week and lost, played poorly this week and won, so there was an equal amount of frustration - last week it was at the result, this week at the performance."

was perhaps understandable, although the lacklustre attitude was troubling. Pride was restored with a gutsy showing in the Springboks showdown but any momentum was lost in a largely uninspired final outing against the Italians.

Interim head coach Johnson capped 10 new players on a tour in which the management language shifted from "winning and assessing" to "development" after a lacklustre opening defeat.

"It has been a tough old tour with injuries and our depth has been tested," explained the Australian.

"That is what we needed to do - test our depth - and this reign is going to continue a little longer because we want to make sure we have a competitive squad.

"It is a hard year, a long year, and you can take pride in the resolve of the boys to finish it off.

"But I'm not walking away from the fact that we have to improve areas of our game, and we can't accept that as a standard."

Johnson was without British and Irish Lions contingent: Stuart Hogg, Richie Gray and Sean Maitland, while Ryan Grant was whisked off to Australia to join them on the eve of the clash with Samoa.

Fellow first-team regulars John Barclay and Ross Ford were ruled out by injury before the plane was boarded and Nick De Luca and Max Evans were excused in order to work on pre-season conditioning.

Hence the talk of strengthening the player base.

However, Johnson could not have imagined just how deep he would need to delve.

Six players went home - five injured and Jim Hamilton for family reasons - while another two stayed on after the Samoa game but were not fit to play again.

Scotland finished the win over Italy with Fraser Brown, who has never started a professional game, at hooker, scrum-half Greig Laidlaw reverting to stand-off for the second week running and Strokosch running in the decisive score from openside flanker.

From the raft of new faces, lock Tim Swinson was the most impressive, with a powerful display against the Springboks a highlight, while Glasgow team-mate Alex Dunbar can be satisfied with his contribution, which included a try in the 30-17 loss to the host nation.

Laidlaw's kicking was as solid as ever, Strokosch remains a formidable presence and prop Alasdair Dickinson showed up well on his return to the international fold but Matt Scott was the undoubted star of the tour, with the Edinburgh centre offering the most potent attacking threat.

Scotland's long-standing troubles at stand-off continue, with Tom Heathcote, Ruaridh Jackson and Peter Horne all in the wars and unable to stake a claim for the number 10 jersey.

Maybe Hogg's midweek outings for the Lions could provide a solution.

Winger Tim Visser was strangely subdued and only managed a second-half replacement appearance against Italy after his showing against Samoa, while David Denton will want to put this season behind him after such a promising start to his Scotland career.

Ryan Wilson, so consistent for Glasgow, was another frustrated by injury and was denied the chance to pressure those ahead of him in the back row pecking order. And spare a thought for hooker Pat McArthur, who lasted a mere five minutes on his international debut against Samoa.

With very little continuity in selection and a threadbare squad, up and down performances should be no surprise.

"We don't want to be a team that has peaks and troughs," added Johnson.

"We are trying to be a competitive team all the time. Yes, we beat Italy, but we set the bar the week before and want to be there, or thereabouts, all the time."

Johnson may have a few more answers after this tour but many questions remain before the Scottish puzzle can be solved.