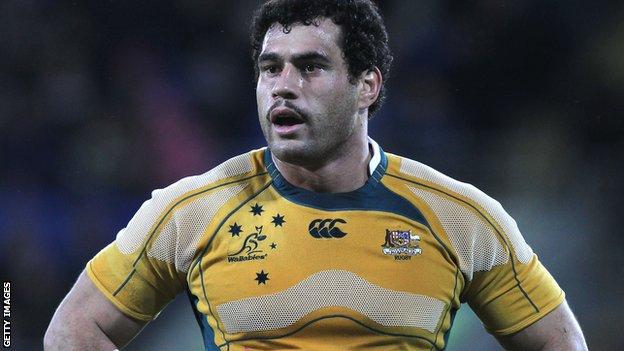 Australia have called up experienced flanker George Smith as cover for Saturday's second Test against the British and Irish Lions in Melbourne.

The 32-year-old won the last of his 110 caps four years ago before announcing his international retirement in 2010.

Uncapped full-back Jesse Mogg and centre Ben Tapuai are also drafted in after several Wallabies were injured in their 23-21 defeat in the first Test.

Christian Leali'ifano, Berrick Barnes and Pat McCabe were all taken off.

Leali'ifano was knocked out while tackling Jonathan Davies but should be fit to play in Melbourne but Barnes, who took a head knock, and centre McCabe (neck) look doubtful.

There are also concerns over wing Digby Ioane and centre Adam Ashley-Cooper. Both have shoulder injuries.

Smith, who made his international debut in 2000, last played for Australia against Wales in Cardiff in November 2009.

He was his country's most capped forward before Nathan Sharpe surpassed him.

After a stint in Japan, Smith returned to Australia earlier this year on a short-term contract with the Canberra-based Brumbies but suffered a knee injury and was ruled out of contention for the first Test.

The physical Tapuai, who has seven caps, last appeared for the Wallabies on last year's autumn tour to Europe. The 24-year-old can play at either inside or outside centre.

Mogg, 24, has been in outstanding form for the Brumbies this season.