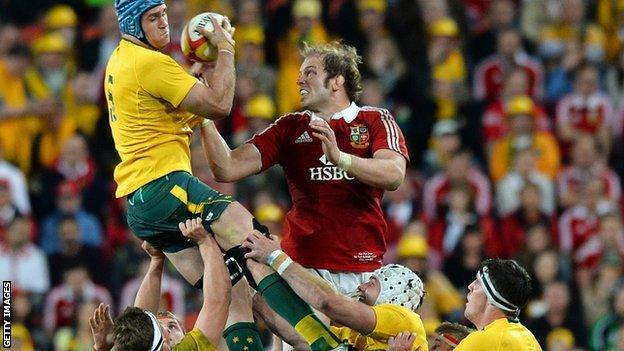 Australia captain James Horwill has been cited after an alleged incident with Alun Wyn Jones in the opening Test against the British and Irish Lions.

Horwill, 28, is to face a disciplinary hearing on Sunday after being accused of stamping or trampling on fellow lock Jones during the tourists' 23-21 win.

The incident in the third minute of the game in Brisbane was referred to the citing commissioner by the Lions.

Queensland Reds player Horwill has been cited under Law 10.4b of the International Rugby Board's disciplinary rules, which states "a player must not stamp or trample on an opponent".

Lions head coach Warren Gatland said: "We had a look at it and felt it needed to be referred on.

"I played in the days when rucking was allowed and I have still got some of the scars that bear witness to the ruckings I had.

"But the head for me was sacrosanct. You stayed away from that. But it is up to the citing commissioner to make any further decision."

He added: "Alun Wyn is fine. The medical team had a look at him at half-time, and at full-time they put a couple of stitches in his eye."

In March, Lions centre Brian O'Driscoll was suspended for three weeks for stamping during Ireland's Six Nations match against Italy.

Horwill made his debut for Australia against Fiji in 2007, and has since gone on to win 35 caps. He was making his first international appearance for 18 months against the Lions after 10 months out injured with a hamstring problem.

After taking on the Melbourne Rebels on Tuesday, the Lions will play the Wallabies in the same city on Saturday in the second game of the three-Test series.

The final Test will be in Sydney on 6 July.