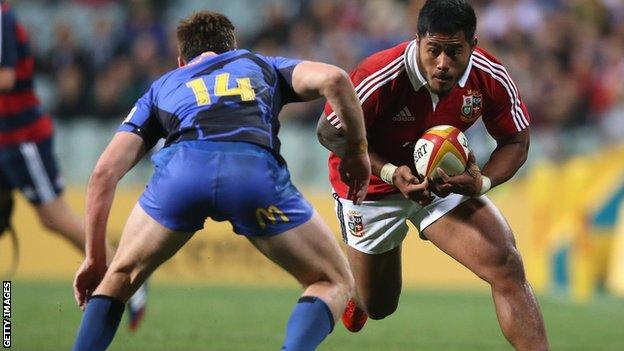 Manu Tuilagi is named in a strong British and Irish Lions side for the final midweek game of their Australia tour in Melbourne on Tuesday.

The England centre will face the Rebels after suffering a nipped nerve in his neck against Queensland Reds on 8 June.

Lock Geoff Parling, one of four players in the side who came on in Saturday's first Test victory, will be captain.

His wife Elle gave birth to a daughter, May, via C-section on Thursday as Parling was preparing for Saturday's first Test, in which he came on for the final 10 minutes.

"I am really proud," he said. "I was a bit nervous the night before and everyone is fine now. It has been a good few days.

"It is obviously a great honour and I am looking forward to getting some more game time. A few of the boys have a point to prove and are keen to start."

Tuilagi will renew his England centre partnership with Brad Barritt as he bids to return to Test contention for Saturday's second Test against the Wallabies in Melbourne.

While wing Tommy Bowe will not play on Tuesday - to ensure his hand is fully healed - he is available for Saturday.

Ireland prop Tom Court has been called up to the squad as cover for Alex Corbisiero (calf) and will be on the bench on Tuesday.

Mako Vunipola had originally been named as one of the replacements but he has been withdrawn in case he is needed to start in place of Corbisiero on Saturday.

"I don't think Jamie is too far away. He is potentially in contention for that second Test," Gatland said. "It is a great tribute to the medical team and fitness staff.

"The squad is looking healthy, and having almost everyone available is great. If you look at Australia, who took a bit of a battering with injuries last night, we are in a good place."

Elsewhere on Tuesday, Sean O'Brien will return to open-side flanker after two outings at blind-side, with Lydiate at six and Justin Tipuric on the bench.

Former Wales loose forward Gareth Delve, who won the last of his 11 caps before moving to Melbourne for their debut season in 2010, will skipper the Rebels.