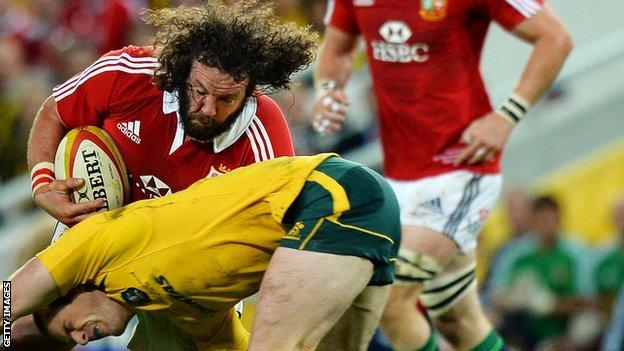 Prop Adam Jones says the British and Irish Lions can take their tight-forward play "up a level" in Saturday's second Test in Melbourne.

In Brisbane the Lions in the first of three Tests.

"I think we can take it up another level in set-piece. It's up to us to do it now," said Wales star Jones.

"We know they're going to come out fighting. They're one down so obviously the onus is on them to win, but if we win, we make a bit of history."

Of eight completed scrums in the opening match, the Wallabies won their three feeds while the Lions lost three of their five.

Jones made way for English rival Dan Cole in the 52nd minute with England's Mako Vunipola coming on for fellow countryman Alex Corbisiero at the same time.

Drama unfolded in the closing minutes as Australia replacement Kurtley Beale missed two late shots at goal, slipping as he attempted a long-range winner in the game's final act.

Jones, whose country suffered three last-minute defeats by Australia in 2012, was relieved "the shoe was on the other foot a bit".

He also agreed with coach that Beale wore the wrong footwear.

And he quipped: "Massive relief [at the end]. I was glad he [Beale] slipped, very glad he slipped. Perhaps he should wear studs."

The 32-year-old, playing in his third Lions Test after two appearances on the 2009 tour to South Africa, says the Lions were reasonably happy with their overall scrum, line-out and driving play.

He added: "It's quite surreal that we won.

"Obviously a Lions Test is massive and we want to win the series next week and I think if we'd won it a bit earlier the boys would have been enjoying it a bit more, but yeah, it was a tough old game.

"They put us under the pump in the last five minutes.

"Hopefully next week we can start taking it to the next level."

However, he is wary of the Australia attacking threat underlined by double try-scoring wing Israel Folau, whose sporting exploits include top-flight Australian rules football and rugby league.

With an eye on Wales facing the Wallabies at the 2015 World Cup, Jones said: "Folau's pretty decent.

"I'm hoping he goes back to rugby league by the time the [2015] World Cup comes around.

"You know he's a threat, but defensively we're pretty happy.

"We made a few mistakes here and there, I guess, and we know the attacking threat they pose."